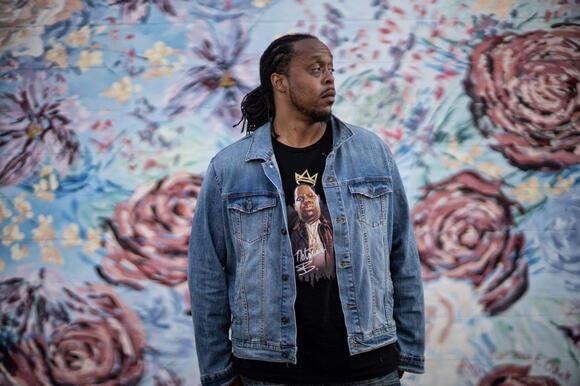 Evan Williams, an illustrator/digital artist, and owner of EWill Studios in Columbus, has his work on display at Beyond the Brix. Credit: Courtesy of Experience Columbus

“Gone Too Soon,” an art collection on display at Beyond the Brix, is the latest exhibition to be featured at the restaurant and highlights the legacies of well-known figures in popular culture.

Located at 970 Parsons Ave., Beyond the Brix is a restaurant with an atmosphere rooted in comfort and inclusivity, Shawnta Hopkins-Greene, owner of the restaurant and Ohio State alumna, said. Opening its doors in November 2020, Beyond the Brix began highlighting different local artists for 90 days at a time beginning in January 2021.

Hopkins-Greene said selected artists can display and sell their art in a way that feels right to them, ensuring that a symbiotic relationship can emerge.

“Most of the work and the handling of the art is done by the artist,” she said. “We get the benefit of being around all this great art, and in all honesty, the artists promote my restaurant just by being there.”

Art from Evan Williams, an illustrator and graphic designer based in Columbus, is now being featured at Beyond the Brix. A self-proclaimed “military brat,” Williams said he lived in Europe for a portion of his childhood, allowing him to visit countries that were rich in art, inspiring his future career. Although Williams is traditionally trained, he said he likes to merge his training with elements of digital art.

Williams said he has made a name for himself by collaborating with numerous Columbus organizations, creating pieces for Experience Columbus and establishing ongoing relationships with regional vendors. After a mutual friend referred Williams to Hopkins-Greene, the showcase at Beyond the Brix was quickly approved, he said.

Hopkins-Greene said providing a sense of versatility by displaying work from various artists is of massive importance to her.

“The color scheme, the art on the walls are all things that make me happy,” she said. “I spend so much of my time in the restaurant, so it’s my home away from home. And art fits right into that.”

Williams’ “Gone Too Soon” is about the legacies left behind by artists who were themselves gone too soon. Williams said one of his prints, “Happy Hour,” shares compositional similarities with Cassius Marcellus Coolidge’s well-renowned “Dogs Playing Poker.” Instead of canines, however, Williams’ version includes Michael Jackson, James Brown, Prince, Ray Charles and Marvin Gaye, he said.

The piece, among others, speaks to one of the collection’s core themes, which is the idea that even if a given artist was only alive for a short time, people feel as though they knew them in-depth, Williams said.

“A lot of people get so attached to celebrities, and they feel like they know them,” he said. “I want the audience to hear their music.”

Even after nearly two years, the pandemic continues to pose challenges for small businesses and creators. Williams said being quarantined changed the way he created and marketed his art out of his personal studio, EWill Studios .

“Quarantine forced everybody into this creative incubator,” Williams said. “We’re still coming out of it, but I believe that on the other side, when everything is lifted, you’re going to see some really good art come out of this.”

Hopkins-Greene said maintaining her business has been difficult, but not impossible. Between being short-staffed and dealing with less foot traffic, the staff at Beyond the Brix has shown immense innovation, and support from the community has been evident, Hopkins-Greene said.

“I can’t complain because the community has rallied around me and made sure that my business stays open,” she said. “So, I’m so grateful.”

The Weeknd performs in front of fans during the halftime show for Super Bowl 55 in Tampa, Florida Feb. 7, 2021. Credit: Courtesy of Martha Asencio Rhine/Tampa Bay Times via ZUMA Wire.