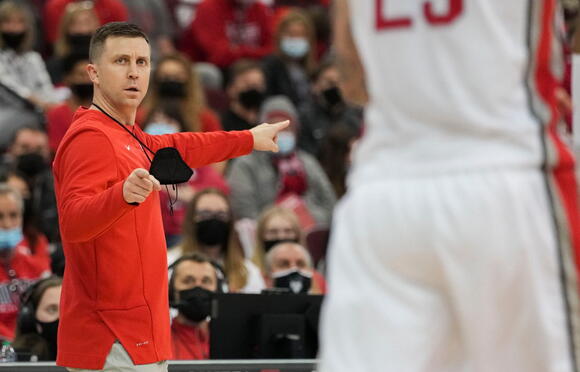 Leading up to No. 13 Ohio State’s game Sunday, there were a few absolutes: the Buckeyes were playing Northwestern, the game was scheduled for 5:30 p.m. and acting head coach Jake Diebler was nervous.

Diebler said that all settled down when the game tipped off, leading Ohio State to a 95-87 victory in his first win as a head coach.

“I get nervous before every game to be honest,” Diebler said. “There’s a deep-rooted passion and love for this game, so there are always nerves before every game for me. There were certainly a few more this game, but I’ve been talking to (head) coach (Chris Holtmann) nonstop, and he gave me a lot of confidence.”

The past 48 hours for Diebler were a whirlwind. Following the Buckeyes’ 67-51 loss at the hands of the Hoosiers from Bloomington, Indiana, Thursday, Holtmann and assistant coach Ryan Pedon — who missed Sunday’s game in the team’s COVID-19 health and safety protocols — were not available for Saturday’s practice, meaning he and the other assistants ran the show.

Diebler said at Saturday’s practice there was still uncertainty as to the duo’s status for the Buckeyes’ matchup against the Wildcats. Once they knew they were going to miss the game, though, Diebler said there was a lot of back-and-forth communication between all the coaches.

“Once we got word that they were in fact not going to be there, it became like a lot of phone calls, a lot of Zooms, a lot of conversations throughout last night and throughout today,” Diebler said. “We knew it was a possibility yesterday before practice, and so the guys got to hear our voices when we prepared for the game and that’s when it started.”

Junior forward E.J. Liddell said the practice Saturday was where the team rallied together.

“Yesterday in practice, we just locked in,” Liddell said. “All the older guys just kept us all in line and just told us to play hard no matter what, and we picked up since coach wasn’t here.”

Diebler, whose brother Jon is the Ohio State all-time 3-point record holder, has coached in multiple capacities prior to joining Holtmann’s staff in 2019. He worked at Valparaiso from 2010-13 before his first stint with the Buckeyes from 2014-16 as their video coordinator.

From there, Diebler got his first assistant coaching job with Vanderbilt from 2017-19, using his time as a player and knowledge from his father, Keith — who coached Ohio high school basketball for almost 40 years — to earn a position on Holtmann’s staff three years ago.

There could have been tougher situations for a coach to be thrust into, but Diebler lucked out by catching Liddell in the middle of a career-high 34-point performance.

Diebler said “it sure helps to have E.J.” ease his pregame jitters, as the Belleville, Illinois, native hit each of his first six shots — five from 3 — to charge to 17 points in the game’s first five minutes, giving the Buckeyes a quick 19-11 advantage en route to the eight-point win.

Northwestern head coach Chris Collins said he didn’t think the Wildcats had an advantage, no matter who was coaching the Buckeyes Sunday.

“To be quite honest, I never look down to the other sideline,” Collins said. “They have a terrific staff. I mean Jake’s a heck of a coach. I know Jake, he’s really good.”

Diebler said heading into the game, he was getting a lot of advice from a lot of people, but some of the best advice came from who he said he wasn’t trying to be: Holtmann. He said the Buckeyes’ skipper told him, “‘Hey, just be yourself,’” and that helped Diebler establish his coaching identity.

However, Diebler couldn’t take all the credit for the victory, giving praise to the man who turned over the whistle to him.