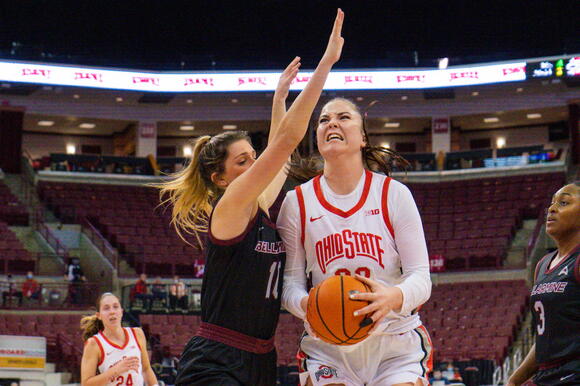 Ohio State women’s basketball used a dominant defensive display to beat Northwestern 74-61 and get back above .500 in conference play Sunday.

The Buckeyes (11-3, 3-2) held the Wildcats (10-4, 2-1) to shooting percentages of 40 from the field and 27 from 3-point range en route to their second consecutive win. Ohio State forced Northwestern into 20 turnovers, which it scored 10 points off of.

While the Buckeyes held firm on the defensive end of the floor, their offense turned in an unimpressive performance — shooting just 36 percent from the field and 26 percent from 3-point range.

Ohio State entered the third quarter with a seven-point lead but pulled away from the Wildcats in the frame behind a 23-11 scoring advantage. Northwestern shot just 27.3 percent in the third quarter while missing all three of its 3-point attempts.

Northwestern found an offensive rhythm in the fourth quarter, connecting on 61.1 percent of its shots while cutting Ohio State’s 21-point lead to 13 by game’s end.

Although Ohio State’s offense sputtered, junior forward Rebeka Mikulasikova posted a double-double behind 16 points and 12 rebounds while shooting 5-for-11 from the field. Mikulasikova’s prowess on the glass helped the Buckeyes stake out a 43-38 rebounding advantage.

The guard tandem of junior Jacy Sheldon and senior Taylor Mikesell each added double-digit scoring outings, with 20 and 13 points respectively. Mikesell — who produced 32 points against Illinois Thursday — struggled from the field, however, shooting 5-for-23 and 20 percent from 3-point range.

Despite her shooting struggles, Mikesell added six assists and five rebounds in the win.

The Buckeyes return home Wednesday when they host Michigan State at The Schottenstein Center at 7 p.m. The game will be streamed on BTN+.