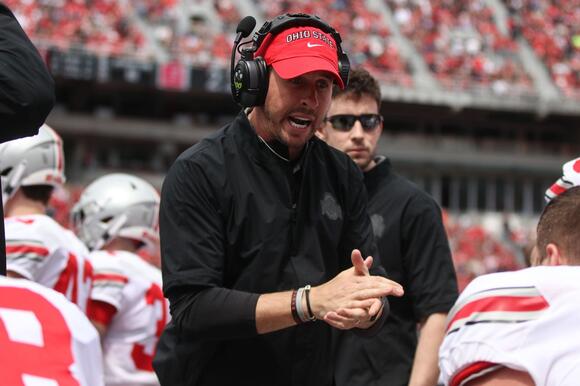 Wide receivers coach Brian Hartline talks with the players on the bench in the first half of the 2019 Spring Game on April 13, 2019. Gray beat Scarlet 35-17. Credit: Casey Cascaldo | Lantern File Photo

Hartline will remain as wide receivers coach, while aiding the Buckeyes in passing-down situations in his new role. Head coach Ryan Day said Hartline has a tight connection to the program, which helped him gain the new role.

“ Brian is a dedicated Ohio State Buckeye,” Day said in the release. ““He is the top wide receiver’s coach in college football and he has continued to develop as an offensive coach to the point where we want him to have more of an impact on our offensive game plan.”

Earlier this season, Hartline emphasized that he was not looking elsewhere in terms of his coaching future.

Hartline was ranked as the ninth-best college football recruiter for the high school class of 2022 and the best at the wide receiver position, according to 247sports.