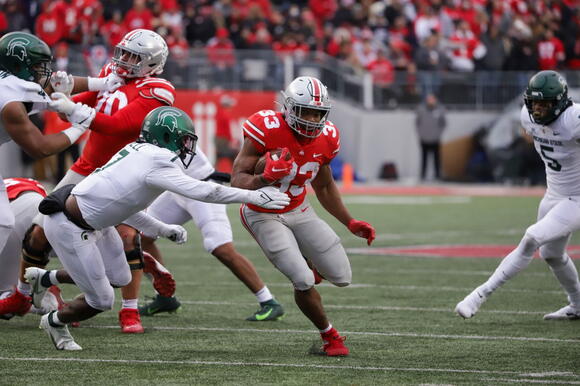 Redshirt junior running back Master Teague III announced Monday that he will declare for the 2022 NFL draft.

In his four years with the program, Teague was a valuable member of multiple top-tier offenses — including a 2021 offense that ranked first in points and total yards per game. The Murfreesboro, Tennessee, native leaves Ohio State with multiple Big Ten and Rose Bowl titles.

Teague expressed gratitude for his time as a Buckeye in a tweet Monday.

“Although it has been a challenge, it has made me a better man and caused me to lean on my faith that much more,” Teague said. “I am so grateful to be a part of The Brotherhood at The Ohio State and a part of Buckeye Nation!”

Teague battled injury in his final season at Ohio State, playing in just seven games while splitting time with freshman TreVeyon Henderson and redshirt freshman Miyan Williams. In those seven games, Teague produced 355 yards and four touchdowns — including one in his final game at Ohio Stadium against Michigan State Nov. 20.

Prior to his redshirt junior season, Teague saw an increased role — being All-Big Ten Third Team in 2019 and Second Team in 2020.

Teague ended his Ohio State career with totals of 1,764 yards and 17 touchdowns across 34 games played.