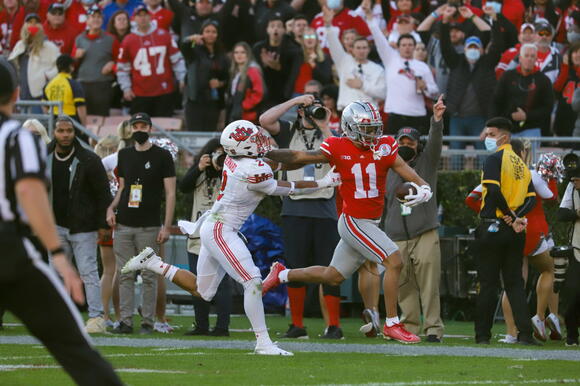 With 4:22 remaining in regulation of Saturday’s Rose Bowl and looking to take their first lead of the night, redshirt freshman quarterback C.J. Stroud looked for his favorite target: sophomore wide receiver Jaxon Smith-Njigba.

Firing out of the slot, Smith-Njigba broke to the outside before streaking towards the right sideline, getting a step on Utah sophomore cornerback Malone Mataele. Stroud uncorked a strike to Smith-Njigba’s outside shoulder to a spot where only his receiver could snag it. Smith-Njigba hauled it in while toe-tapping a foot inbounds to give the Buckeyes the lead.

That touchdown was indicative of a record-breaking night from the quarterback-receiver duo, as both Buckeyes broke a multitude of records en route to No. 6 Ohio State’s 48-45 Rose Bowl victory over No. 11 Utah.

Ohio State head coach Ryan Day pointed to the connection between his underclassman quarterback and wide receiver as the primary reason for their record breaking performance.

“C.J. and [Jaxon] just have a great connection. They have a great feel, and I think there’s a lot of trust there that’s been built over the year,” Day said. “They read each other well, and they’ve got a real special connection.”

With attention to his record-breaking, career day, Smith-Njigba gave credit to his teammates for his big performance.

“[I] got to give thanks to coach and C.J., of course, for giving me opportunities. And the O-Line. It’s not just me. I couldn’t have done it without them,” Smith-Njigba said. “I just try to take in every moment every time the ball is in the air. I feel like I did that today.”

As Smith-Njigba put up one of the most prolific seasons by a wide receiver in Ohio State history, his quarterback said their connection was something that grew as their time together progressed.

“We built that connection probably all the way back — we came in as freshmen together, came early. We were throwing at the line the first day. Scout team, last year we really built it,” Stroud said. “This doesn’t surprise me at all. When I heard the numbers, I didn’t really notice because he does this all the time.” 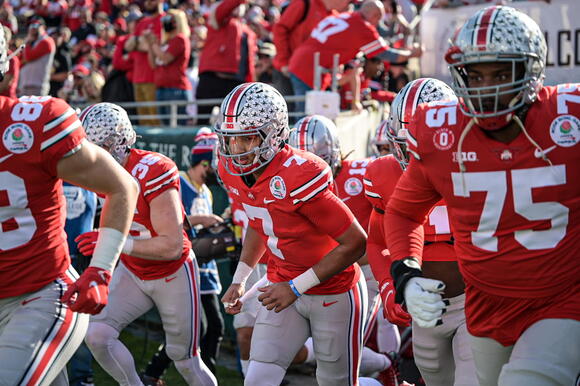 In terms of yardage, Stroud’s 573 yards served as an Ohio State program best — becoming the first Buckeye quarterback to throw for over 500 yards in a game — and breaking Dwayne Haskins’ record of 499.

Focusing on his dominant Rose Bowl performance, Stroud said he was just doing his job of leading the offense to yet another big day.

“This is the Rose Bowl, man. This is where the legendary games are played,” Stroud said. “Every game I go out there, I try to do my best and make sure I prepare the right way and do the right things because you never know what can happen in a game.”

As the Buckeyes relied heavily on the duo of Stroud and Smith-Njigba to come back against the Utes, Stroud said he was proud of how his team responded in the face of adversity.

“I’m really proud of my guys for staying calm and not really panicking, not pointing fingers or anything like that,” Stroud said. “We all kind of stayed even keel and made sure we were going to win this game.”