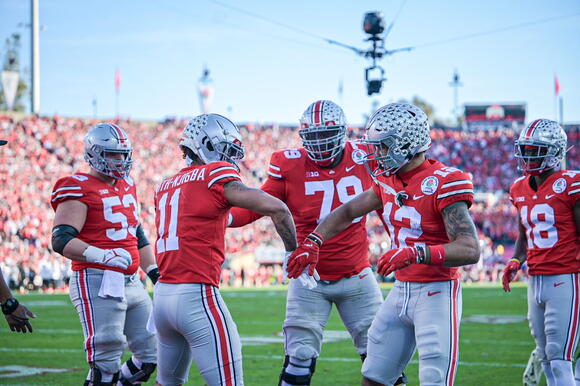 Entering halftime trailing No. 11 Utah 35-21, the Buckeyes had their backs against the wall at the Rose Bowl.

No. 6 Ohio State mustered just 72 yards and no points in the first quarter before scoring three touchdowns in the second. But, the Utes matched the Buckeyes and forced a fumble at the goal line to maintain momentum.

Searching for resolve, the Buckeyes banded together one more time during the 2021 season. Several players stood up in the locker room and addressed the team, providing the fuel that motivated Ohio State to complete its 48-45 comeback victory.

The Buckeyes were tight-lipped about who and what was said, but the one often mentioned was senior cornerback Demario McCall.

A sixth-year senior, McCall has experienced plenty in his Ohio State career. He said he’s seen past teammates like Parris Campbell and Terry McLaurin stand in front of the team, and he wanted to add his name to the same type of legacy.

“I had to talk to the boys in the locker room at halftime, just to get them up,” McCall said. “It wasn’t going the way we wanted it to in the first half. I got up, said a few things, get them going.”

From a shutout in the College Football Playoff during his freshman season to a loss at Michigan in what is his last, the highs and lows McCall has been through as a Buckeye is unlike any other, which is what sophomore safety Bryson Shaw said sets him apart.

“The passion he has for this program is unmatched,” Shaw said. “I love Demario, I’m really going to miss him. Without him, things could’ve gone sideways.”

Redshirt freshman quarterback C.J. Stroud contributed to the Buckeyes’ resurgence Saturday, becoming the first player to throw for more than 500 yards in a single game throughout program history.

Stroud said he, too, took the front of the room at halftime with the idea of Ohio State’s mantra of “fight” as his theme.

“In life, you’re going to have ups and downs,” Stroud said. “I went in there and said what I had to say because we wasn’t going out getting blown out. It wasn’t going down like that, so we rallied together, put it all together in the second half and came out with a dub.”

The comeback was completed when graduate kicker Noah Ruggles made a 19-yard field goal with nine seconds left on the clock, sending the Buckeyes — who were down but not out just two quarters previously — onto the field as Rose Bowl champions.

As the team celebrated, head coach Ryan Day said he was pleased with the way the Buckeyes came together. He said he stepped to the side at halftime, allowing the players who make up the team to take the initiative and stir up inspiration.

Day said some of the Buckeyes brought up the 2019 Big Ten Championship game against Wisconsin, when Ohio State trailed 21-7 at halftime against the Badgers. Ultimately, those who stepped up in the locker room Saturday made Day proud.

“Our guys at halftime said enough. They were going to impose their will in the second half,” Day said. “I think that’s what’s going to build momentum into next year. That’s what we need if we want to go win a bunch of championships.”

Day said the odds were stacked against Ohio State during the Rose Bowl, but the Buckeyes needed a halftime regroup to set them back on track, according to sophomore linebacker Cade Stover.

“There was really never a doubt,” Stover said. “There was this aura you could feel. I’m not sure what it was, but when we put our mind to something, I feel can really do it.”

Ohio State not only captured its ninth victory at The Granddaddy of Them All — which stands as the second most among all college football programs — but did so in record-breaking fashion.

As far as what exactly the Buckeyes said at halftime, that will likely remain a legend.

“I’ll leave that for the locker room. There were some things that I probably can’t repeat and that’s OK,” Day said. “That’s the way football goes. That’s the toughness and that’s the edge that we have to play this game with all the time.”