Football: Buckeyes aim to ‘get the bad taste’ out at Rose Bowl 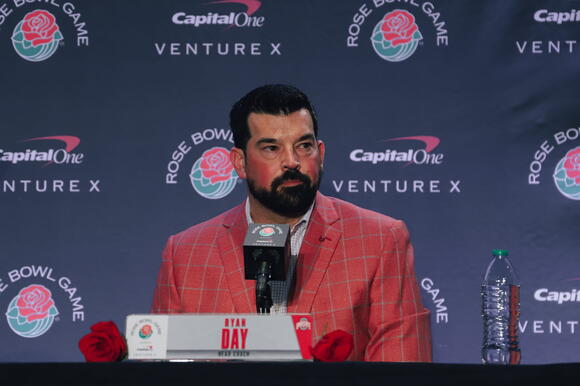 It had been four years since the Buckeyes last lost two games in a season.

It had been 10 years since Ohio State lost to Michigan. The Buckeyes made the College Football Playoff in each of the previous two seasons.

Those timelines reset in 2021. No. 6 Ohio State will play in its 16th Rose Bowl against No. 11 Utah Saturday, and head coach Ryan Day has said it’s not where the Buckeyes wanted to be. But, Day thinks finishing the season with a win in The Granddaddy of Them All would still be special.

“A lot of hard work has been put in. Winning this game would be important,” Day said. “11-2 and a Rose Bowl win would be a big deal.”

Ohio State’s streak of four consecutive Big Ten championships snapped with its loss in Ann Arbor, Michigan, Nov 27. The Wolverines captured their first trip to the conference title game after defeating the Buckeyes 42-27.

The Buckeyes don’t want to be reminded of their loss to their rival. Redshirt sophomore running back Steele Chambers said the Rose Bowl presents a chance to move on from the defeat.

Ohio State is familiar with postseason play and competing for championships. Now in a bowl game with no conference or college football title on the line, the question of motivation ahead of Saturday has arisen.

The Buckeyes have a favorable history at the Tournament of Roses, though. They’re 8-7 all-time and are  tied for the second-most Rose Bowl wins among all programs in college football. They’ll have a chance to increase that win total in addition to ending a challenging season on a high note.

“Some of us are talking about like, ‘Alright, I can’t go out like this,’” graduate offensive lineman Thayer Munford said. “Some of us are just like, ‘We’ve got to get this taste out of our mouth, go in here, beat Utah and call it a day,’ so we can leave on a good note and not a loss to Michigan.”

The Ohio State head coach also said he feels the Buckeyes understand the importance of the Rose Bowl because of the players who played in the same game in 2018 sharing their experience with their younger teammates. That’s something Day thinks is invaluable.

“I think the thing that’s more significant is that there’s two years of guys who haven’t really been through a bowl experience before on our team just because of last year and the way things played out,” Day said. “Going through this process has been great for them. They’ve really enjoyed their time here and they understand how big of a game this is.”

While Ohio State can relax a bit more during bowl week than it has compared to preparing for a College Football Playoff, Day said there’s still an edge to the team.

Michigan senior running back Hassan Haskins ran for 169 yards and five touchdowns when the Wolverines defeated the Buckeyes. Ohio State allowed 297 rushing yards to the Wolverines, a total it hadn’t allowed since the 2018 season.

Day said winning the line of scrimmage is key in the Rose Bowl.

“The challenge has been set forth to win up front and to be physical in this game,” Day said. “That’s nothing new. That’s not groundbreaking, but it certainly has been an emphasis and always is an emphasis.”

The Rose Bowl will allow Ohio State a multitude of opportunities to springboard its way into 2022 on the right track. A win would allow departing players to leave with one more victory, and the game itself will give some players more experience and a baseline of their skill sets prior to the start of the offseason.

Day said Ohio State is up for the challenge. Above all, during a season in which they were tested in many directions, the Buckeyes are focused on getting back to their winning ways.

“It doesn’t take an expert to figure out what we need to really focus on here over the last month,” Day said. “I think that the practices have been really good. They’ve been spirited and they’ve been physical. There’s been a lot of progress made, but the ultimate test will be on Saturday.”