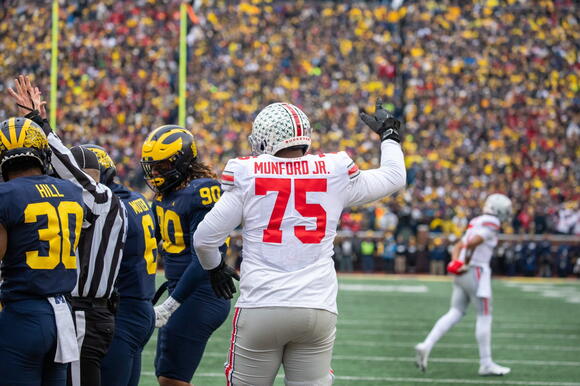 It’s been a season full of unforeseen circumstances for Thayer Munford.

The graduate offensive lineman returned to Ohio State primed to be one of the nation’s best offensive tackles, but he was shifted inside to guard during fall camp — where he spent much of his season. At times, Munford was pushed back to tackle due to injuries and a six-man rotation on the offensive line but didn’t stick there for an elongated period of time.

But with redshirt junior left tackle Nicholas Petit-Frere opting out of the Rose Bowl and declaring for the 2022 NFL draft, Munford will shift back to his natural position for the final game of his Buckeye career.

“I feel at home,” Munford said. “I’m just happy that I am back at left tackle right now and just can’t wait for this game.”

As a tackle in 2020, Munford was voted to the All-Big Ten First Team while helping the Buckeyes offense finish seventh in the nation in yards per game.

Although he made the move to guard, Munford’s production was still among the conference’s elite — earning All-Conference First Team honors in 2021. He also garnered national notoriety for his play inside, landing on the American Football Coaches Association All-American First Team while picking up second team honors from CBS Sports and the Associated Press.

Munford’s efforts on the inside also aided Ohio State to the top-ranked offense in terms of scoring and total yardage in 2021.

With the NFL draft on the horizon for the Cincinnati native, Munford said his season at guard has given him versatility that he could use at the next level.

“I see myself at the next level wherever I’m at. That could be right tackle, right guard, left guard, left tackle. It really doesn’t matter where I’m at,” Munford said. “As long as I can get on the field and play and try and see where I can fit in most, I think I’ll be better wherever I’m at.”

Munford’s move to guard was rooted in giving junior offensive tackle Dawand Jones an opportunity to see the field. Jones took over the right tackle spot, while Petit-Frere shifted over to left tackle.

Offensive coordinator Kevin Wilson said Munford’s decision to shift inside is indicative of the selflessness he’s displayed in his career at Ohio State.

“I think it says a lot for Thayer, just the teammate, team leader he is, to do that. And now the luxury is he has the skill set to come back and play the tackle for us in a pinch,” Wilson said. “When you’ve got a lot of people in your ear about what you need to do, he made one of the biggest sacrifices for our team this year.”

Despite the lost time at tackle, Munford said moving back to his natural position is “kind of second nature” to him.

This is Munford’s second time as part of a Rose Bowl team, but the first time around he was unable to play due to an injury. As Saturday will mark the final time Munford will suit up for the Buckeyes, he said the Rose Bowl is a great place to close out his collegiate career.

“It’s just an honor just to play here. Even though I was here before but I didn’t play, but I was like, OK, I like this because it’s a nice scenery,” Munford said. “The mountains are nice. Everything is nice. The roses are very beautiful, of course, hence the Rose Bowl. Everything about this place is very beautiful.”