Football: ‘It’ll drive me for the rest of my life’: Stroud using Heisman results as motivation for Rose Bowl and beyond 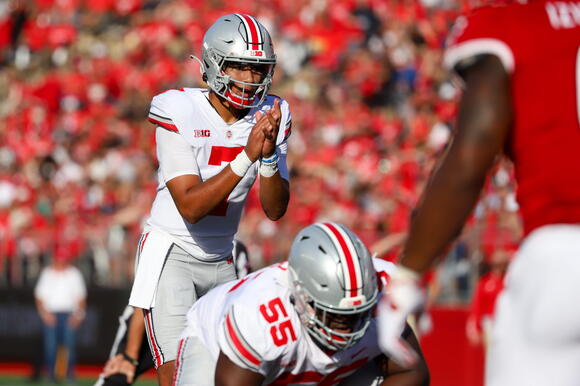 On a night where his performance during the season was meant to be celebrated, redshirt freshman quarterback C.J. Stroud left New York City with a source of motivation he thinks will last his lifetime.

A fourth place finish in Heisman Trophy voting is nothing to bat an eye at, particularly considering Stroud never threw a collegiate pass prior to his first year as Ohio State’s starting quarterback. But, the results coupled with ESPN analyst Desmond Howard’s jab at the Buckeyes’ offensive line likely left Stroud with a bad taste in his mouth.

In fact, Stroud said his competitive nature won’t allow him to feel happy for himself with where he placed in the Heisman voting. He also said he didn’t think Howard’s comments were the truth, making for a perfect storm that will linger with Stroud for the future.

“I think it will do a lot for me. I wouldn’t say I’m disappointed. I’m happy to even be a Heisman finalist,” Stroud said. “I’m a competitor, so I’m not just going to take that and be all jolly and happy with it. It’ll drive me for the rest of my life probably.”

With the Rose Bowl against No. 11 Utah Saturday to wrap the season, Stroud can add onto his 3,862 passing yards and 38 touchdowns that led him to a sweep of the Big Ten Conference’s major offensive awards, including a selection to the First Team All-Big Ten.

Stroud’s accomplishments led him to become the third Buckeye in the last four seasons named a Heisman finalist — but that’s not where Stroud wants to be.

“To me, it’s awesome. I’m blessed, but it’s not good enough to me,” Stroud said. “I feel like I did a lot this season. I could have definitely played better. I think if I played a couple more games, and I do the right things, maybe things go the other way.”

Stroud stepped into the starting quarterback position after Justin Fields departed for the NFL. After an up-and-down first four games, Stroud turned it on and threw 30 touchdowns over the last eight games, including a six-score performance in the first half to tie the Ohio State single-game record Nov. 13.

Offensive coordinator Kevin Wilson said he noticed Stroud settle into his role as the season wore on, noting that the first-year starter carried himself with strong leadership qualities. Wilson said the way Stroud prepares and works on and off the field will only benefit him and the Buckeyes.

“His ability to get more and more comfortable communicating, talking and his ability to prepare has been awesome,” Wilson said. “As a young player, that’s why he’s had such a great year. He sets up to have a great career for us.”

Stroud balanced criticism and praise during a challenging year with an early-season loss to then-No. 12 Oregon and a rivalry defeat to then-No. 5 Michigan. Through all the positives and negatives, Wilson said the quarterback never became selfish.

“I’ve just seen him stay very, very grounded with all the notoriety,” Wilson said. “You don’t see a guy that’s very boastful, you don’t see a guy patting himself on the back — very complimentary of his teammates.”

However, Stroud won’t play alongside Olave and Wilson come Saturday, as the All-American duo announced their declarations for the 2022 NFL Draft. Their absences will allow younger Buckeye receivers, such as sophomore Julian Fleming and freshmen Emeka Egbuka and Marvin Harrison Jr., to take the reins, which Stroud said intrigues him.

Stroud said he aims to finish his first season as a starter on a good note, and he’ll do so in his home state of California.

He said he isn’t overthinking his preparation for the Rose Bowl, but Stroud may have some thoughts from past critics in the back of his mind for not just Saturday, but the rest of his career.

“I think we’ve had a decent year. Of course, we’re not where we want to be but we’re somewhere so that speaks volumes,” Stroud said. “I think that if we go out here and play well, that will be a big-time win and that will jump-start you into the next year. You don’t want to go into the next year with two bad tastes in your mouth.”