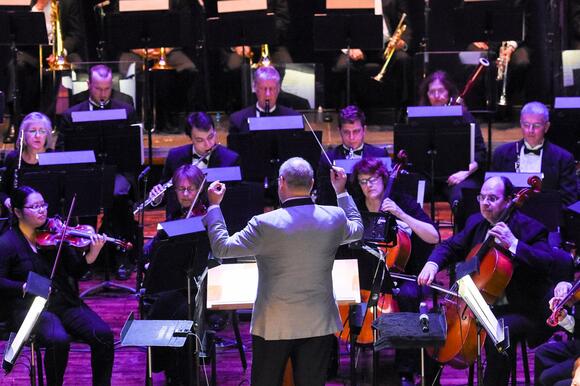 The “Harry Potter” concert series was announced in 2016, and since then, over 2.7 million fans have experienced the event. The Columbus Association for Performing Arts will present “Harry Potter and the Order of the Phoenix in Concert” in the spring of 2022. Credit: Courtesy of Randall L. Scheiber

The Columbus Symphony is set to perform the musical score of the fifth “Harry Potter” film, “Harry Potter and the Order of the Phoenix,” at the Palace Theatre.

The Columbus Association for Performing Arts will present “Harry Potter and the Order of the Phoenix in Concert” April 2, 2022, at 8 p.m. and April 3, 2022, at 2 p.m. The movie will be shown on a 40-foot screen while the Columbus Symphony plays the soundtrack from the film. The “Harry Potter” concert series was announced in 2016, and since then, over 2.7 million fans have experienced the event, according to the website .

Rich Corsi, vice president of programming for the association, said this will be the fifth concert in the “Harry Potter” series at the Palace Theatre due to its huge success with the previous movies.

“You just forget there’s 75 people on a stage playing because you get so wrapped up into the movies and the music is so gorgeous,” Corsi said.

The association has a longstanding history with the Columbus Symphony, presenting a “Harry Potter” film together every 12-14 months, Corsi said.

“We did the first film — massively successful,” Corsi said. “So we took a stab at No. 2, No. 3, No. 4 and now we’re on the fifth movie. We’ve already added a second show because the first show almost sold out.”

Corsi said many attendees return each year for the following film installments because of the love fans and musicians have for the series.

“ ‘Harry Potter’ already has really cool music, so to hear a symphony perform it live would be awesome,” Elliott Brown, a first-year in arts management, said.

Brown said she comes from a huge family of “Harry Potter” fans, herself included. She said tickets to the concert are the perfect Christmas gift for her family members.

“Especially the holiday season, if you’ve got a ‘Harry Potter’ fan, my God, there’s no better gift,”  Corsi said. “It’s just amazing; you go there knowing you’re going to be with a couple thousand people that love the same thing that you love.”

Tickets for the concert can be purchased on the association ’s website , in person at the CBUSArts Ticket Center or by phone.