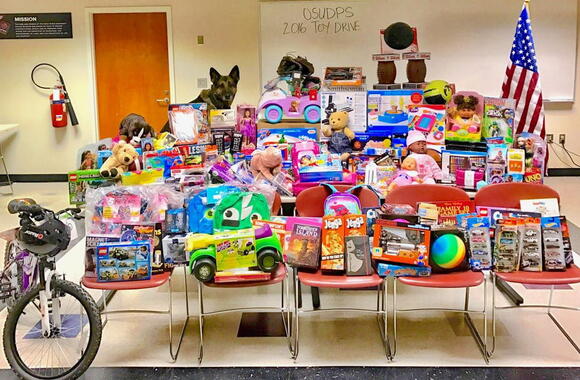 In partnership with the national Toys for Tots campaign, the Department of Public Safety will hold its 15th annual toy drive Thursday from 7-10 a.m. in front of Blankenship Hall. Credit: Courtesy of Ohio State University

In the spirit of giving and following social distancing guidelines, Ohio State’s Department of Public Safety will hold a drive-thru donating event.

In partnership with the national Toys for Tots campaign, the department looks to spread some cheer this holiday season with its 15th annual toy drive — this year as a drive-thru Thursday from 7-10 a.m. in front of Blankenship Hall, according to its websit e .

University Police Detective Susan Liu said she started working with Toys for Tots in 2005 and decided to organize a partnership with the university because she didn’t see any similar drives on campus.

“I wanted us to put our collective heads to use and see if we can get some toys for these kids because we serve their community,” Liu said.

As a national campaign run by the United States Marine Corps, Liu said she likes that Ohio State can do its part and support those within the Buckeye community.

“In this organization, we are able to give back to not only members of our community, but to the young ones here who may have family members that may be Ohio State employees or affiliates,” Liu said.

Liu said the drive-thru aspect of the campaign started in 2019 and looks to make toy donation as easy as possible.

“We’re just hoping that it gets people the ability and accessibility to donate without having to leave their cars,” Liu said. “With social distancing, this is a perfect way for people to just stop by, say hi and drop off a toy.”

Liu said while any donations are appreciated, there are age groups that are traditionally overlooked in this type of drive, including newborn and infant children.

University spokesperson Dan Hedman said if people are unable to go to the drive-thru event, they can drop toys off at other locations and times .

In the 15 years the university has held the drive, Liu said it has been able to donate over 2,000 toys and continues to work toward bringing holiday cheer to more children every year.

“Last year we collected 186 toys, and that’s with COVID and everything,” Liu said. “If I could get 250 toys to donate this year, that would be fantastic.”