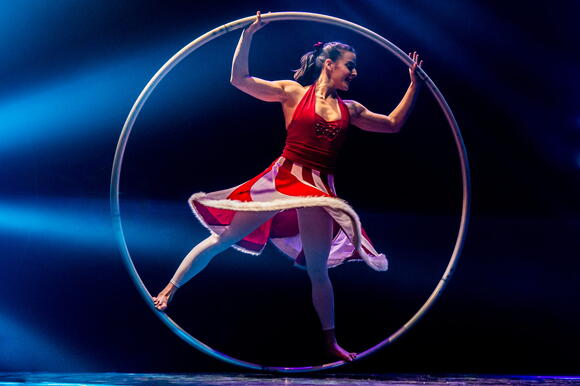 ‘A Magical Cirque Christmas,’ a holiday variety show that follows a whimsical storyline about saving Christmas, comes to the Palace Theatre Friday at 7:30 p.m. Credit: Courtesy of Matt Bishop

Traditional Christmas performances like “The Nutcracker” or “A Christmas Carol” should expect to see some new competition this season.

“A Magical Cirque Christmas,” which follows a whimsical storyline about saving Christmas, is coming to the Palace Theatre Friday at 7:30 p.m. The event features magicians, an award-winning comedy magician and circus acts, including acrobats and trapeze artists, Jim Millan, co-writer and co-director of the show, said.

“It’s full of great music, great magic, great comedy and some of the best young variety circus-style performers in the country,” Millan said. “It’s a show that consistently sort of delivers at a very high level.”

Millan said the story highlights a performer, Lucy Darling — who is also the host — as she helps to ensure the seasons change after the person in charge of that role neglects doing their job. To save Christmas, Millan said Darling must go on a journey, which is where the circus acts come in.

Millan said the show is a variety show, meaning that instead of individual acts performing one at a time, multiple different acts go on stage at the same time, creating a cohesive and entertaining environment. The format of the show is like Cirque du Soleil’s setup in that way, Millan said.

“The whole thing is encompassed in a kind of unstyled spirit that I think was done right,” Millan said. “It elevates all the individual acts, and they feel connected and special.”

By using classically popular holiday songs, Millan said the show is able to put a new spin on something that people already know and love. The use of holiday tunes ensures there is something in the show for everyone, he said.

“We just wanted to do something that would be a brand new Christmas experience, rather than just a purely nostalgic experience,” Millan said. “Combining the groups of artists that we did and their sort of fresh take on circus art or contemporary singing, we felt that this is the beginning of a new Christmas tradition.”

Rich Corsi, vice president of programming at the Columbus Association for the Performing Arts, said the decision to bring “A Magical Cirque Christmas” to Columbus was an easy one.

Corsi said the future success of “A Magical Cirque Christmas” in Columbus is boundless due to its popularity in years past.

“This is one of those shows that will probably start becoming holiday traditions for people, kind of like ‘The Nutcracker’ and ‘Christmas Carol,’ ” Corsi said. “Things like that, that people do on a year-to-year basis.”

With mask requirements implemented and proof of vaccination or a negative COVID-19 test required to enter the theater, Corsi said shows are getting closer to how they used to be.

“People are really feeling comfortable coming out to the venues, and we’re making them as safe as possible,” Corsi said.

Corsi said a lot of what is appealing about theater is its ability to transcend stressors of the outside world and allow people to live in the present.

“There’s not many things that can distract people and just get them out of the day-to-day grind and just go and enjoy themselves for an hour and a half,” Corsi said. “It’s good to be able to take people away and get their minds off of everything and just enjoy that moment while they’re in there.”

Millan said the excitement for the show can be felt in the air, along with Christmas cheer.

“I think the audiences that have come have proven that they’ve embraced it in a way that’s very loving and very wonderful,” Millan said. “It’s just sort of meant to feel like the Christmas season really has begun and that this one’s going to be a special one.”

Tickets for “A Magical Cirque Christmas” start at $40.75 and are available for purchase through CAPA’s website .

The Weeknd performs in front of fans during the halftime show for Super Bowl 55 in Tampa, Florida Feb. 7, 2021. Credit: Courtesy of Martha Asencio Rhine/Tampa Bay Times via ZUMA Wire.

Zach Bravo is making his national tour debut as Rum Tum Tugger in the touring production of “Cats,” showing at the Ohio Theatre Tuesday through Sunday. Credit: Courtesy of Matthew Murphy.