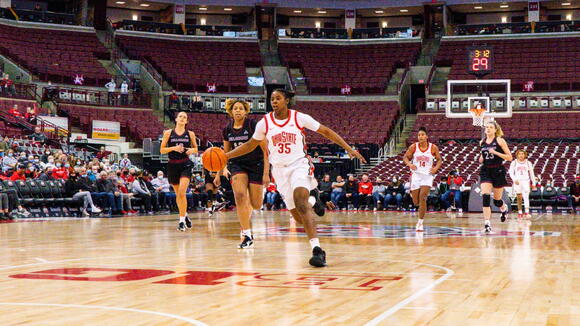 In its previous two games, the No. 20 Ohio State women’s basketball team struggled to play a complete game on both sides of the floor.

The Buckeyes (7-1, 1-0 in Big Ten) delivered a crisp performance on all fronts Tuesday at the Schottenstein Center against an ailing mid-major opponent, defeating the Mount St. Mary’s Mountaineers (1-7, 0-0 in Northeast Conference) 94-50.

McGuff, who questioned his team’s offensive execution at times during the road trip, said his team got more open looks at the basket this time around because they re-established the fast-paced style of play that allowed his team to start the season 5-0.

“ It got us going,” McGuff said. “It gets us a couple of quick baskets and puts a lot of pressure on the other team.”

Returning to the top of the scoring charts were the Buckeyes’ junior and senior guards, with Jacy Sheldon and Taylor Mikesell leading the offensive effort with 19 and 15 points a piece on a combined 15-for-21 shooting, respectively. The backcourt mates — who rank first and second in points for Ohio State this season — have now scored in double figures in all eight contests.

Despite the starting backcourt duo once again stuffing the stat sheets, Ohio State received production out of a number of reserves, most notably from sophomore forward Gabby Hutcherson, who sparked the team with hot shooting and energy off the bench with a season- and career-high 13 points, six rebounds and two blocks.

Hutcherson, who has seen limited minutes so far this season, said she prepared herself to come into the game and produce on both ends, as it would send a message to the team and coaching staff that she is ready to excel when her name is called.

“I just have to take advantage of the minutes that I get every single time, so I can show them what I can do,” Hutcherson said. “I just have to stay ready at all times.”

McGuff said he was pleased with Hutcherson’s performance, as it was a result of the preparation and focus she put in during practice.

“Gabby looked really good lately in practice,” McGuff said. “That’s why we put her in first. She was ready, and she delivered, so that was very encouraging.”

On the defensive end, the Buckeyes full-court press also returned to its explosive form, generating 23 Mountaineer turnovers that led to 31 points on offense. Leading the Buckeyes in steals was Sheldon with four.

After being forced to abandon the press at times during the road trip, McGuff said he was encouraged to once again wreak havoc on defense and force opponents into easy turnovers.

“That’s part of our identity,” McGuff said. “I thought we were pretty good at it in the first half. It got the game going fast and allowed us to generate a couple turnovers that we can turn into points.”

McGuff’s pressure defense also took the Mountaineers’ top scorer out of her offensive rhythm, holding graduate guard Kendall Bresee to a season-low four points on 2-of-8 shooting and forcing her into five turnovers.

Sheldon said limiting Bresse’s production was a positive step for her team’s defense, as it was a result of the hard work and preparation her team put in during practice to improve on that side of the ball.

“[Defense] is something we’re focusing on and we have to continue to get better every day,” Sheldon said. “That shows focus, that shows that we were locked in. We need to continue to do that because Indiana is a great team.”

Despite Bresee’s struggles, the Mountaineers were led by senior guard Michaela Harrison and redshirt junior Aryna Taylor, who led the team with eight points each along with 11 combined rebounds.

With a ranked Big Ten collision with No. 10 Indiana looming, McGuff said his team needs to quickly shift gears and focus on preparing for the Hoosiers because head coach Teri Moren’s team will give the Buckeyes their largest challenge so far this season.

“It’s going to be a big test,” McGuff said. “They are really good and I think when it’s all said and done they are a potential Final Four team after what they did last year and what they returned. So [it’s a] big test, but also a great opportunity.”

The Buckeyes’ matchup with the Hoosiers will take place at the Schottenstein Center Sunday at 7 p.m. and will be televised on BTN.