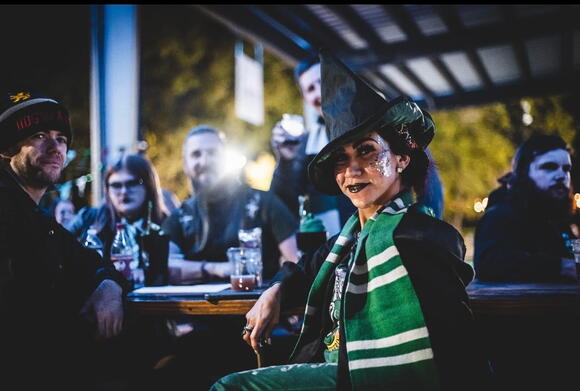 For decades, “Harry Potter” fans have united over their shared passion for the wizarding world through various clubs and conventions.

Sunday at Skully’s Music-Diner, that congregation took place in the form of Wizard Fest — a recurring party event packed with cosplaying, themed drinks, dancing and more — visiting Columbus for the first time since 2018. Originating in New York in 2017, Wizard Fest provides adults who were children when the “Harry Potter” novels were first published with a space to celebrate their love of wizardry, Tony Azzaro, host of Wizard Fest, said.

“There’s a lot that focuses on the kids that love ‘Harry Potter,’ whether it’s the parks or the toys or things like that,” Azzaro said. “This was intended to be like, ‘Here is something for the original generation. Yes, you guys are now adults, but let’s let you get together with all of those people that remember what it was like to pick up the very first book right from a bookstore.’”

Wizard Fest visits cities across the country, providing trivia, costume contests and other wizard-themed activities to bring the magic to “Harry Potter” fans nationally, Azzaro said. The event has traveled to 37 cities so far this fall.

“Anytime we come back to a city, you know, it’s almost like a music artist,” Azzaro said. “We want to say, ‘OK, these people are going to come, they want to hear the hits, right? They want to hear the stuff that they know and love, but also, what can we throw them that’s new and exciting?’ ”

Renae Gerchow, Columbus resident and Wizard Fest 2021 attendee, said “Harry Potter” has remained timeless in part because of the classic feel to the hero’s journey and the range of characters, which allows any reader to find someone to relate to.

“I think it just hit at the right time and it produced this fandom that just kind of feeds on itself,” Gerchow said. “You know, there’s so many podcasts and essays and websites and fanart and fanfiction that, no matter what you’re into, you can find it in ‘Harry Potter.’ ”

Emily Zahn, another first-time attendee of Wizard Fest 2021 and Ohio State alumna, said she has always had “Harry Potter” in her life. She said she routinely attends the Columbus Symphony Orchestra’s annual “Harry Potter” concert, which consists of the orchestra playing the soundtrack to a “Harry Potter” film as the movie is played.

“I think it’s just a period of time where people can connect so well with growing up as adolescents and then through their adulthood, you know, everybody hoping and wishing the magic in life and the real world actually happens,” Zahn said.

Azzaro said many people within the “Harry Potter” fandom feel the magical element of the story provides them with an escape from reality.

Zella Johnson, a Columbus resident and Wizard Fest attendee, said she grew up with a love of the wizarding world because her mother introduced her to it.

“It’s kind of an escape, but at the same time, you can find it in the real world,” Johnson said. “Even if we’re all Muggles in real life.”

As the first novel in the “Harry Potter” series approaches its 25th anniversary, Azzaro said the love for the wizarding world will persist for many years to come.

“I think that’s why ‘Harry Potter’ is timeless to people, because they can find themselves in it,” Azzaro said. “That’s why they connect with it.”

This story has been revised to correctly spell Wizard Fest.