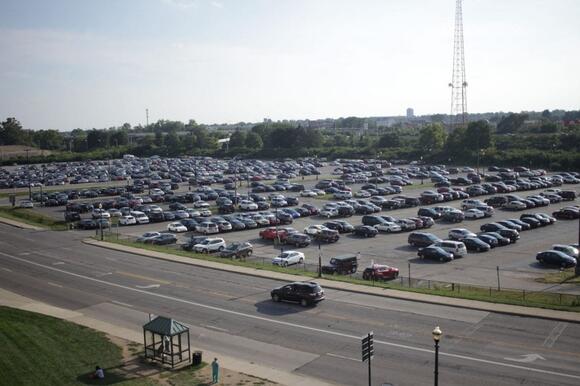 Tens of thousands of Ohio State students commute to campus — sometimes especially early or late in the day.

This semester, Shruthi Madhu, a second-year in pharmaceutical sciences, said she has several classes that go late into the evening, and with the sun setting earlier from daylight saving time, she feels unsafe walking to her car.

“The latest I come home on some days is 10 p.m., and now with daylight savings, when it starts getting dark at like 5 p.m., walking from my class to the bus stop and then to my car, I just feel very unsafe,” Madhu said.

Madhu said a contributing factor to her safety concerns is where she parks her car at the Carmack lots on West Campus, which takes around 20 minutes to reach from main campus with the Campus Area Bus Service buses.

“At night when I’m going on the bus back to the parking lot, I’m usually the only one on the bus,” Madhu said. “It’s a scary feeling just sitting in your car alone at 10 p.m. and sometimes there’s only a few cars left in the parking lot because most people have gone home by then.”

Saanvi Ganesh, a third-year in pharmaceutical sciences who commutes to campus, said she has experienced several incidents where she wished there were more safety measures taken on campus.

“Last week, I was walking alone in the morning and I felt very unsafe because my walk was in an isolated area and there weren’t many people around,” Ganesh said. “Recently, I’ve been thinking more about getting my own safety device.”

Madhu said she noticed the university’s push for more safety measures, especially for commuter students. Recently, Madhu got one of the safety devices provided by the Willie J. Young, Sr. Off-Campus and Commuter Student Engagement office.

However, Ganesh said she would like for more safety devices to be available at multiple locations on campus.

University spokesperson Dan Hedman said in an email the Office of Student Life has distributed over 4,700 safety devices thus far. He said these were given out through the commuter student engagement office and at different campus events, one of which was in the Buckeye Lot parking area.

Ganesh said she appreciates the alert system put in place by the university due to the increased crime rates.

“It’s nice to get immediate alerts when events like this happen so that I can better protect myself,” Ganesh said.

University spokesperson Dan Hedman said in an email that while police patrol campus, crimes still occur, and all crime should be reported to police.

Hedman said it is best to avoid walking alone, especially at night. Students can use the campus transportation options including CABS, CABS On Demand and Lyft Ride Smart .

Hedman said these transportation options prevent students from walking alone at night. CABS buses have multiple routes to different parking areas and buildings on campus and the Lyft Ride Smart service offers discounted rides for students between 7 p.m. to 7 a.m. for locations within campus and the Short North.

Rave Guardian is another resource students can use, Hedman said. Through GPS tracking, Rave Guardian can alert a virtual guardian if someone does not arrive at their destination within a certain time period.

Hedman said the university is providing resources beyond safety devices, including an online safety class for students living on and off campus to become more educated about enhancing personal safety.

Correction: A previous version of this article incorrectly stated it typically takes around 30 minutes in a CABS bus to get from main to west campus. It also did not explain that safety devices have been available at multiple locations during events. The story incorrectly stated CABS On Demand only services the RPAC, Baker Systems, Watts Hall and areas west of Olentangy River Road in the evening and overnight. The story has been corrected to reflect these changes.