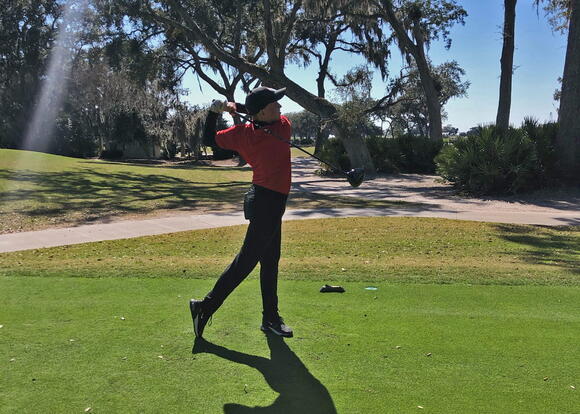 Ohio State then-freshman Maxwell Moldovan tees off for the Buckeyes during a match. Credit: Courtesy of Ohio State Dept. of Athletics

Maxwell Moldovan is no stranger to the golf course. The star sophomore golfer never looked back after picking up a golf club for the first time when he was just 3 years old.

In his hometown of Uniontown, Ohio, Moldovan’s family lives right on a golf course. His father is a golf instructor.

Moldovan said his father has been a great mentor over the years when it comes to golf.

“He’s always been a huge help for me and has been there with me pretty much every step of the way since I started playing tournaments,” Moldovan said.

This constant determination to conquer the sport has led Moldovan to become the most prominent player on the Ohio State men’s golf team.

Even as a freshman, Moldovan was destined to be the team’s leader. Since his first season in 2020, he has consistently led the team in individual finishes.

Moldovan has also provided great insight and motivation to his teammates throughout his career with the Buckeyes.

Head coach Jay Moseley said Moldovan talks with his teammates in an effective way that is both intentional and motivating.

“He doesn’t use wasted words,” Moseley said. “He provides great value when he does speak, and it’s pretty significant and impactful as well.”

Moldovan was already a national success before coming to Ohio State. In 2019, he was a Rolex Junior All-American and won the 2019 AJGA Player of the Year, becoming the first Midwestern male to do so.

Moldovan won two state championships in high school and caught the eye of many colleges in and outside of  Ohio.

Although he always wanted to play golf in the South and received offers from schools such as UNLV and Oklahoma State, Moldovan ultimately chose the Buckeyes.

Moldovan said his decision was driven by the hope of being in close proximity to his family.

“I felt more comfortable being close to home at Ohio State,” he said. “Just being closer to friends and family, something that’s really important to me.”

Moldovan’s first year was muddled due to the pandemic, but he held strong and quickly got to know his teammates.

Senior golfer Grant Engle was a veteran last year who helped Moldovan’s transition onto the team. Engle said he has been impressed with Moldovan’s attitude and work ethic thus far.

Moldovan hopes to play golf his next two years at Ohio State and beyond. He also credits his faith as something that motivates him to get better.

Moldovan said his ultimate goal is to be on the PGA Tour so that he can share his faith with the world.

“If I continue working hard and getting better and get to the point where I can be on the PGA Tour, that’s an opportunity for me to tell millions of people about my faith,” Moldovan said. “That really motivates me.”

Ohio State completed its fall season with two top 7 finishes under its belt. In their most recent event, the inaugural Barbara Nicklaus Cup Oct. 4-5, the Buckeyes finished third among four teams.

Moldovan finished twice in the top 10 this fall, including a No. 3 finish at the Windon Memorial tournament at Northwestern Sept. 28.

Moldovan said he is pleased with how the season has gone thus far and looks forward to what the team can accomplish in the spring.

“It’s been an awesome year and a half so far here,” Moldovan said. “I’m excited to see what we can do this coming spring.”