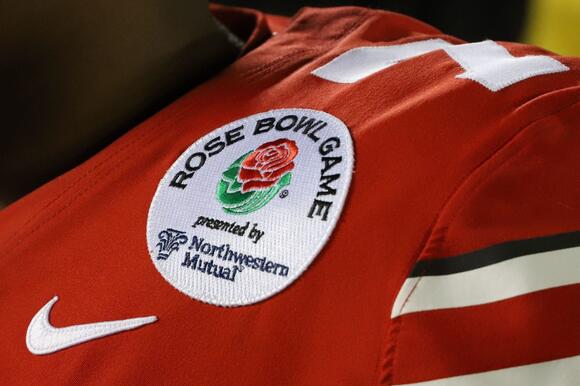 A Rose Bowl Game patch is sewn on jerseys for the game in Pasadena, Calif. on Jan. 1. Credit: Casey Cascaldo | Lantern File Photo

The sting from a critical rivalry upset loss persists in the hallways of the Woody Hayes Athletic Center, but a chance to even slightly make feelings rosier can come on New Year’s Day.

Despite missing the College Football Playoff for the first time since 2018, head coach Ryan Day said the Rose Bowl presents an opportunity to both catapult younger players into 2022 and wash out the bad taste from the Michigan loss.

“When you play in the Rose Bowl, it matters. We take a lot of pride in who we are and that’s really what it comes down to,” Day said. “Everyone’s hurting from the last game. This is an opportunity to change that feeling a little bit.”

Day said the Rose Bowl is “the most prestigious bowl in all of college football,” a tradition-rich game that’s been played for 108 years. Throughout the 20th century, the Tournament of Roses often determined a national champion.

Last time the Buckeyes were in Pasadena, California, they experienced a changing of the guard. Former head coach Urban Meyer retired after No. 6 Ohio State’s 28-23 win over No. 9 Washington, and later placed his whistle around the neck of the next head coach — Day.

“Being in the locker room with coach and that ceremony meant a lot to me. That seems like about 20 years ago,” Day said. “I would say that I’ve probably aged a lot. A few grey hairs popping in, but that’s all part of the experience. Very memorable. I have that picture up in my office.”

Because the Rose Bowl isn’t a playoff game this season, speculation arises regarding whether NFL Draft-eligible players may sit out in order to avoid injury or protect their stock.

In 2019, defensive end Nick Bosa opted out of the Rose Bowl during a season in which he suffered a core muscle injury. Former cornerback Denzel Ward sat out of the 2018 Cotton Bowl.

Players such as wide receivers senior Chris Olave and junior Garrett Wilson or even graduate defensive lineman Haskell Garrett could be among the Buckeyes who are possibilities to opt out of the Rose Bowl. But, Day doesn’t seem worried at the moment.

“We’ll deal with that on an individual basis based on how it all shakes out,” Day said. “Right now, counting on everybody to play in the game.”

No. 6 Ohio State will play No. 11 Utah for the second time in series history, marking their first meeting since 1986.

Utes head coach Kyle Whittingham, who took over for Meyer prior to the 2005 season, earned Utah’s first Pac-12 Championship with a 38-10 win over No. 18 Oregon. Even with the conference title and a 10-3 record, Whittingham said the Utes will “need great preparation to have a shot” at beating the Buckeyes.

“I’ve been doing a little bit of homework since I found out who our opponent is going to be. There is no weakness, I can tell you that,” Whittingham said. “We got our hands full. It’s going to be a great challenge for our team.”

Utah will make its first Rose Bowl appearance boasting the No. 1 defense in the Pac-12, holding opponents to just over 315 yards and about 21 points per game. Juniors linebacker Devin Lloyd and defensive end Mika Tafua own two of the top three sack totals in the conference, with 9.5 and eight, respectively.

The Buckeyes will return to the Rose Bowl for the 16th time, owning an 8-7 all-time record. While Ohio State may wish it made the CFP for the third consecutive season, Day said a New Year’s Six appearance allows the Buckeyes to still “finish this thing the right way” in Pasadena.

“It’s a tradition-rich bowl game. There are so many great people that have played in that game and certainly a ton of coaches that have coached in that game,” Day said. “It’s always an honor to be a part of something like that.”