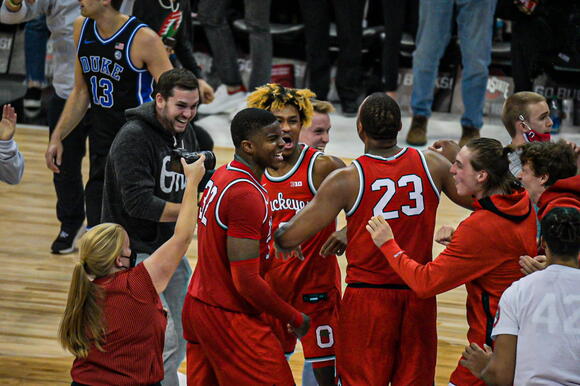 When the buzzer sounded and the clock hit zero Tuesday, Ohio State had knocked off the No. 1 team in the nation — but the job didn’t end there.

The Buckeyes’ (5-2, 0-0 Big Ten) triumph over Duke was arguably one of the biggest wins of the young college basketball season and provided a major confidence boost for a fairly inexperienced team heading into conference play. But, Ohio State assistant coach Ryan Pedon said the Buckeyes can’t live in the past with a difficult stretch — including multiple Big Ten matchups — approaching.

“The reality is: In basketball, you don’t have time to enjoy the fruits. Our players will have to understand that. They know we’ve got to turn the page and do it very quickly,” Pedon said. “The challenge we have in front is going to be tough on the road, no doubt about it. But you hope, from a coach’s standpoint and viewpoint, that we carry some momentum that we gained the other night.”

Following the major upset win, Ohio State travels to State College, Pennsylvania, to kick off conference-play against Penn State (4-3, 0-0 Big Ten). The Nittany Lions have gotten off to an inconsistent start, showing off in some blowout wins, but also falling victim to a few close let-downs against Power Six opponents.

Penn State’s most trying loss came on the road against Massachusetts Nov. 15, where it was blown out by the Minutemen 81-56. The Nittany Lions followed that game with two runaway wins over St. Francis Brooklyn and Cornell, before losing two of three games to Power Six opponents — with the win coming in a 60-45 triumph over Oregon State in the Emerald Coast Classic Nov. 27.

The Nittany Lions enter Sunday’s meeting off a back-and-forth 63-58 loss to Miami (FL).

Pedon pointed to Penn State’s size, experience and aggressiveness as dangerous attributes that could throw the Buckeyes off track.

“[We’ve] got a lot of respect for them as a program. Certainly there’s a handful of guys on their roster that have a lot of familiarity with the Buckeyes,” Pedon said. “Our players will be prepared for that and ready to go.”

Entering Sunday’s contest, Penn State has one of the worst offenses in the Big Ten, averaging 67.3 points per game — 13th in the conference. However, a trio of double-digit scorers excel in the Nittany Lions offense.

“It’s strictly scoring, so once they get started, it’s hard to stop them. So just make them feel uncomfortable all night, make it hard for them,” Wheeler said. “If we just control what we can control, then we’ll like the outcome at the end of the day.”

Down low, the Buckeyes will have their hands full with 6-foot-9 senior forward John Harrar — who leads the Penn State post attack with 10.6 points per game on 75 percent shooting.

Tasked with slowing Harrar’s efficient offense will likely be Ohio State sophomore forward Zed Key, who averages 0.9 blocks per game. Junior forward E.J. Liddell will also likely rotate onto Harrar often, but Liddell’s help defense has proved to be effective this season — ranking second in the Big Ten with 3.6 blocks per game.

While Key is still finding his footing defensively this season, Pedon said he’s been pleased with what he’s seen from the Bay Shore, New York, native to this point in his sophomore campaign.

“The success he’s had is well-deserved, it’s earned. He’s earned that because he’s worked hard,” Pedon said. “His focus and concentration, in terms of what he’s doing on a daily basis, and his effort, attention to detail, those are things that will guide his success moving forward.”

“I hear it a lot, the physicality of the Big Ten. I’m ready for it,” Branham said. “I feel like I’ve been tested through these games, but I know it’s going to be a big test Sunday.”