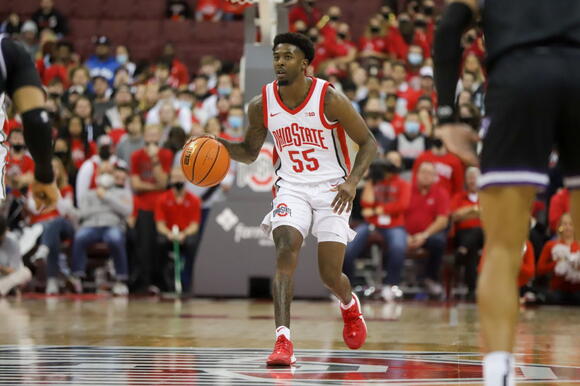 The Ohio State’s men’s basketball roster has combined for a total of 209 minutes of time on the floor in 14 combined road games at State College, Pennsylvania.

Buckeyes graduate guard Jamari Wheeler knows the hardwood of the Bryce Jordan Center better than any of them, though, logging 1,449 minutes in 63 games in his four seasons at Penn State, so Sunday will be a homecoming for the Nittany Lion transfer.

“I’m just excited to go back and play,” Wheeler said. “A lot came with that. I put up banners, we had the most wins for them.”

Head coach Chris Holtmann has been sifting and sorting through potential lineup and rotation combinations, but Wheeler has certainly emerged as a reliable option for him in his first seven games donning the Scarlet and Gray — all of which he has started.

Wheeler was recruited to improve the defense, earning a spot on the Big Ten All-Defensive Team the past two seasons, leading the conference in steals both years and finishing his Nittany Lion career owning the sixth-most steals in program history with 191.

In his first seven games, he has done just that.

Wheeler leads the team with nine steals, contributing largely to Ohio State’s adjusted defensive efficiency rating which ranks 49th in the country — up 33 spots from Holtmann’s worst defense a season ago — according to the KenPom Rankings .

His confidence in that aspect of his game has shown through. After the Niagara game, where Purple Eagles senior guard Marcus Hammond scored 12 of their first 14 points in the first 4:21 of the game, Wheeler confidently said that he told Holtmann to let him guard Hammond.

After that, Hammond only scored 10 points in his final 33 1/2 minutes on the floor.

The Live Oak, Florida, native has quietly assumed a traditional role at the one spot in the Buckeyes’ offense.

His ability to facilitate has certainly shown through his 25 assists and incredible 2.78 assist-to-turnover ratio — marks that both pace the Buckeyes with the latter ranking third in the Big Ten.

Wheeler’s shooting from deep, though, has also given the Buckeyes a boost. Holtmann has been trying to get Wheeler to take more shots when the opportunity presents itself, saying that he has been “timid” at times with his shot selection.

Wheeler has taken just 25 shot attempts in 192 minutes this season, but 15 have come from 3. Despite the small sample size, he has converted at a miraculous 53.3 percent clip.

Regardless of Wheeler wearing both sets of colors in his collegiate career, there’s no question as to where his current allegiance lies. During the Ohio State-Penn State football game Oct. 30, an impassioned Wheeler let out a loud “Beat Penn State” when shown on the jumbotron at Ohio Stadium.

Wheeler said he has helped the scouting department with reports on certain Nittany Lions, despite the Buckeyes’ coaching staff not initiating a conversation about doing so.

Assistant coach Ryan Pedon said that the guard is “as focused as any guy we have on the roster” ahead of the Buckeyes’ first Big Ten matchup of the 2021-22 season.

“I’m sure it’ll be an emotional time for him in a couple days here, as he prepares to go back to a place that he loves and a place that he called home for four years,” Pedon said. “I’m sure he’ll have some emotions going through his head and his heart, but at the end of the day, he’s got to focus on the task at hand and doing what he needs to do for our team.”

Wheeler said when his name is called for the starting lineup Sunday, he’s not sure the reception he will get from the Nittany Lion faithful.

“I’ve had a couple friends and fans reach out to me, saying they’re excited to watch the game, they’re going to be at the game,” Wheeler said. “We’re a different school and we’re competing, so I won’t be surprised if I got a couple boos.”