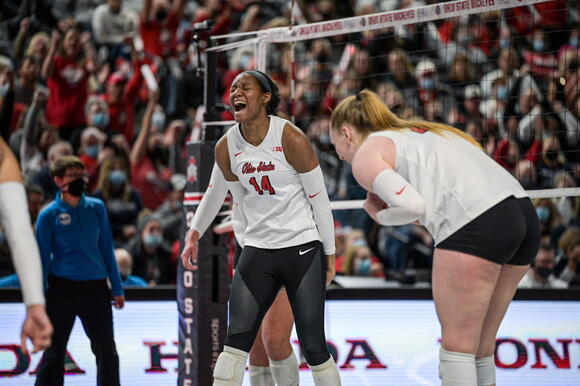 The No. 9 Ohio State women’s volleyball team prevailed 3-0 over Howard University to win its first round match of the NCAA Tournament.

Howard (18-12) entered the tournament with a 12-2 record in its conference matches and won the Mid-Eastern Athletic Conference championship to earn the automatic bid to the NCAA Tournament . Ohio State (25-5) concluded Big Ten play with a 15-5 record and finished tied for third place in the standings.

“I think this has been a long time coming,” junior setter Mac Podraza said. “We’re bringing Buckeye volleyball back, so it’s really cool to see all the hard work we’ve put in paying off and getting to show everyone Covelli.”

It was tight to start the first set until Ohio State pulled away after a 3-0 service run by senior defensive specialist Hannah Gruensfelder to put it up 10-7. A kill by freshman outside hitter Dami Awojobi helped Howard gain some momentum, but back-to-back errors by the Bison put Ohio State up 15-9 at the media timeout.

Following the break, a block by sophomore middle hitter Rylee Rader and Podraza kept the Buckeyes’ momentum going, 19-10. The Bison fought back with a kill from junior middle blocker Tamar Wells, but a service ace by Rader helped Ohio State close out the first set 25-12.

Ohio State got off to a quick start in the second set with a 3-0 service run by freshman defensive specialist Sydney Taylor to force an early Howard timeout, down 6-2. A kill by Awojobi stopped the Buckeyes’ run, but Ohio State did not stop fighting with back-to-back blocks to lead 16-5.

After the timeout, a kill by freshman outside hitter Bria Woodard helped Howard get points back on the scoreboard. However, Ohio State continued its dominating performance with a service ace by junior libero Kylie Murr to win the second set 25-7.

A kill by freshman middle blocker Cimone Woodard out of the timeout gave the Bison some life, but multiple service errors gave Ohio State a 17-6 edge. The Buckeyes continued to ace the Bison off the court to win the third set 25-10.

“I think we stuck to our game plan and we always talked about how it can be anybody’s game, so not under-estimating our opponent,” Podraza said. “I think we did a good job of that and it ultimately helped us come out on top.”

The Buckeyes look to focus on taking care of business on their side of the net as they continue in the NCAA tournament, head coach Jen Flynn Oldenburg said.

“We have to take care of the match in front of us, and the best way to do that is to control our side of the net,” Oldenburg said. “How clean can we be? How good can we be? How consistent can we be? Because it’s going to translate into later matches.”

Ohio State is set to host Tennessee Saturday at 6 p.m. in the Covelli Center in the second round  of the NCAA tournament.