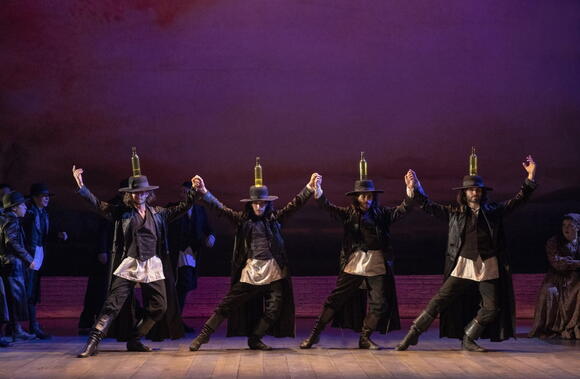 “Fiddler on the Roof” is an award-winning musical about the trials and tribulations of the intersection of faith and love coming to the Palace Theater in Columbus Dec. 14-19. Credit: Courtesy of Joan Marcus

Ask Tevye the Dairyman any question and the answer is almost always “tradition.”

“Fiddler on the Roof,” an award-winning and highly acclaimed musical, is coming to the Palace Theatre Dec. 14-19. The story follows Tevye the Dairyman, his wife and their five daughters in the Russian shtetl — a town with a large Jewish population — of Anatevka in 1905.

Jason Thomas Sofge, who plays the Constable, said the production highlights the family’s struggles as they challenge the traditions of their culture, faith and time while facing eviction from their village by the Tsar.

“At its core, ‘Fiddler on the Roof’ is about change,” Thomas Sofge said. “It is about people growing and learning from other people and accepting change.”

In the musical, the Constable plays an interesting role, Thomas Sofge said, as he executes the Tsar’s demand to evict everyone from Anatevka, including Tevye and his family.

Thomas Sofge said although the Constable is considered the antagonist, there was once a time where he grew up with the people in the village and was a friend to them.

“Even up until the very end he says, ‘This isn’t coming from me, I’m just following orders,’ ” Thomas Sofge said. “So from his perspective of the Constable, he doesn’t think that he’s a bad person, but what he does is terrible.”

Thomas Sofge said this area of the plot is what makes the production so relevant to audiences, even today.

“There’s never not going to be a theme that applies to people’s lives,” Thomas Sofge said. “This involves refugees, the story of how these people are kicked off their land and go to live somewhere else and how they’re accepting that change.”

Eddieomar Gonzalez, an ensemble dancer in the musical, said “Fiddler on the Roof” impacts audiences in many ways because everyone who watches it is different.

“Culturally, this is going to speak very heavily to the Jewish community because it has to do with Jewish culture and how Jews were exiled from Anatevka,” Gonzalez said. “But I also think for people who maybe don’t have a relation to the Jewish community can see, like, it humanizes people, for one. Two, for me, it shows that even something that we see as being very pure as a tradition, you’re going to evolve and change.”

Gonzalez said the biggest lesson he’s learned from performing in the musical is that growing up and making one’s own decisions is a part of life. He said he was raised Catholic but changed his ideologies throughout his life, a message mirrored in the musical.

In the musical, Yente, the matchmaker in Tevye’s village, is responsible for choosing a husband for the available women, Gonzalez said. When three of Tevye’s daughters come to him with their own choices of a man for their marriages, he is forced to reevaluate his beliefs and determine if he wants to go against Yente’s decisions and marry his daughters off differently than what is custom.

“Change can be still a voice of reason,” Gonzalez said. “I think making life yours, based on your own values and your own instincts, is what’s really important.”

Gonzalez said working in this production has been humbling and has anchored him during times of turmoil.

“It’s nice to use all your training that you’ve had throughout the years to push forward a story that has touched so many people,” Gonzalez said. “It actually kind of feels like what you’re doing is important, especially in a time where our political views and everything in this world have been kind of all over the place.”

Thomas Sofge said no matter what’s going on in the world, “Fiddler on the Roof” is going to stay relevant.

“This story is timeless, and every generation that sees it relates to it on different levels,” Thomas Sofge said. “And even as you see it, as you get older, as a human being, you relate to different things at different times in your life. This piece of theater is alive and thriving.”

Tickets for “Fiddler on the Roof” are still available and can be purchased on the Columbus Association for the Performing Arts website starting at $34.