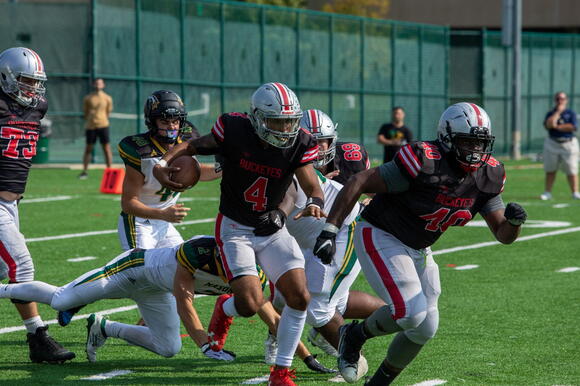 On Dec. 8, 2019, the Ohio State club football team woke up as national champions. The day before, they had beat a talented Oakland team to win the first championship in team history, 36-9.

Now, after a year without football due to the pandemic, senior quarterback Kellyn Gerenstein and the rest of the 2021 team are on the cusp of waking up as champions once again come Saturday.

“It’s a very hard thing to do,” Gerenstein said. “It’s something for everyone to be proud of.”

Coached by James Grega Jr. — a former assistant sports editor for The Lantern — the Buckeyes are sitting at a cool 6-2, with the losses coming to NCAA Division III schools, ranked No. 1 in the National Club Football Association power rankings.

After winning the Great American Conference Championship in the snow Sunday with their second 40-point win over Wright State in as many weeks, the Buckeyes were named the No. 1 team in the country and are set to play George Mason for the NCFA National Championship.

A loss by No. 1 Columbus State (GA) to Gordon State in the South Atlantic Conference Championship helped thrust the Buckeyes to the national title game.

As for the team itself, Grega said he is proud of his roster that has been almost completely renovated since that fateful 2019 season, with even the playbooks having to be reworked. One exception to that renovation is Gerenstein.

With a rare chance to lead two teams to national championships in as many opportunities, Gerenstein — who earned NFCA Offensive Player of the Year in 2019 — said his play is hardly the reason behind the club’s success.

Grega had high praise for his star quarterback.

“I mean, that kid’s like my little brother,” Grega said. ”He’s the ultimate leader of this team.”

“Any time that you can get enough players in your university to come compete for a national championship, when it’s something that they got to pay for or volunteer for, it’s pretty special to have the talent and have the camaraderie to be able to reach a championship,” Scroggins said.

With a range of players from an array of experience levels, Grega said the Buckeyes still have a chance to do something noteworthy — while having fun.

“Just because we’re on a lower level of football doesn’t mean you can’t play it and still have a great time,” Grega said.

It’s a little late to join this season, but tryouts will open in January to anyone wanting to play for Grega, who Scroggins said has a unique relationship with his players. It allows them to incorporate new elements and have fun in an otherwise painful game, Scroggins said.

“Any skill level is welcome,” Grega said. “If you don’t want to play, we’re always looking for volunteers to coach, volunteers to work game days.”

With a win, it would be Grega’s second national championship in his short tenure as the club’s head coach, and the second for Gerenstein and Scroggins during their time at the university.

Although the club football team was out of commission in 2020, Gerenstein said the team’s approach to its title defense was undeterred.

“Because of all the restrictions and everything we went through in 2020, and even earlier in 2021, it’s going to feel different than [2019]. But as far as the play on the field, I feel like nothing has dropped off,” Gerenstein said. “We were off for a whole year and a half. We really had no football activity, we had no pads from January 2020 to August 2021. But as far as the games go, that’s all the same. It never changes. It’s football.”