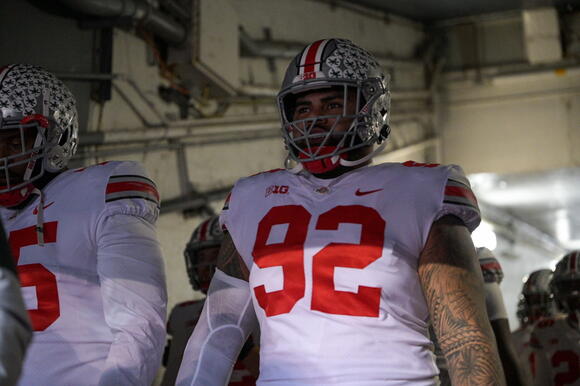 As the clock dwindled into its final minutes and then-No. 5 Michigan approached the goal line once more in the fourth quarter, the Buckeyes peeled back a bit on defense.

Head coach Ryan Day said the Buckeyes allowed the Wolverines to score on their final drive to make the game 42-27 with just over two minutes to go, “otherwise, they were just going to take a knee and run out the clock.” Wolverines senior running back Hassan Haskins ran four yards into the end zone, punching in his fifth touchdown of the game.

“We have to stop the run. That’s the goal,” sophomore safety Bryson Shaw said. “Especially in away games in the Big Ten, got to stop the run. For them to run the ball on us like that, it’s embarrassing.”

Michigan torched then-No. 2 Ohio State’s defense for 297 rushing yards — the most the Buckeyes allowed since giving up 340 to Maryland in 2018.

The Buckeyes entered their rivalry game giving up an average of 102.3 yards on the ground per game, second-best in the Big Ten Conference and 11th-best in the country. They had only surrendered more than 91 rushing yards in two games since Week 2, but Michigan’s dominance in the run game allowed them to control the game, according to Day.

“They just stayed on schedule the whole time, and that was the recipe I’m sure they had to win the game,” Day said. “We weren’t able to stop that and that’s really, really disappointing, especially when you know they’re going to do it.”

The Wolverines pounded inside run spaces in the trenches, blowing up the A and B gaps early along the line. Haskins contributed 169 rushing yards alone, setting a pair of career-bests in scores and yards.

Despite Haskins’ ability to evade defenders and find holes, sophomore linebacker Cody Simon said it wasn’t a matchup issue that plagued the Buckeyes. Instead, Ohio State lacked execution, according to Simon.

“We didn’t do it to our standard,” Simon said. “The outcome is what happens when you don’t execute as strong as you’re supposed to.”

Michigan converted 66 percent of its 24 first downs on the ground — an even eight across both halves, which propelled the Wolverines to a perfect 4-for-4 on their second half drives, finishing with touchdowns.

“When you feel like they’re controlling the game on the other side of the ball, it gets frustrating,” Day said.

Ohio State had troubles of its own getting its running game going, rushing for a season-worst 64 yards. The Buckeyes turned to redshirt freshman quarterback C.J. Stroud to convert 19 third downs through the air despite the snowy conditions.

The Wolverines used their rushing attack — sophomore running back Blake Corum also had 14.5 yards per carry on six attempts — to set the tone of each half. They broke free six of their longest runs of 10 or more yards during their first drives of each half, three in each.

Day said Ohio State will have to “take a hard look” and determine where issues in stopping the run prevailed — because it helped Michigan defeat the Buckeyes for the first time in 10 years.

“We just didn’t execute like we were supposed to,” Simon said. “Obviously, we put in all the work to try to stop their offense, but it just didn’t come out how we wanted it to. We just got to get back in the lab and keep going.”