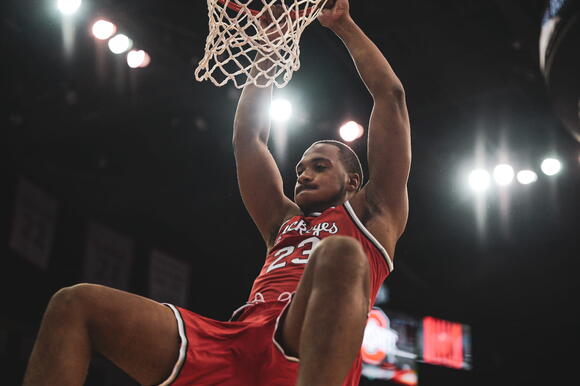 With 7:51 left in the first half, sophomore forward Zed Key threw down a massive two-handed slam for his fifth and sixth points of the night.

Much to the chagrin of his head coach, pleasing the Buckeye NutHouse, Key raised the roof while running back on defense.

Laughs echoed throughout the Schottenstein Center’s media room during Holtmann’s answer, and whether or not he was joking or serious will show if Key continues the celebration, but the one thing that was undisputed was his ability to assert his physical presence against Duke’s big men down low.

Key finished Tuesday night’s upset leading all scorers with a career-high 20 points on 8-for-15 shooting, including a team-high four free throws on a night where the Buckeyes struggled from the charity stripe.

The Bay Shore, New York, native has started four of the first six games for Ohio State, consistent with Holtmann’s claim that lineups and rotations throughout the season will be interchangeable, but Key may have solidified himself as a viable option down low for the Buckeyes.

Holtmann emphasized after the game that Key is a true big man and can play the five for the Buckeyes.

“All those people that are clamoring for us to have a center: please, please. He’s a young kid who is growing; he is a center,” Holtmann said. “He’s 6-8, he’s a little bit shorter than Terence Dials (Ohio State Men’s Basketball Director of Professional Development), but he has 7-1 wingspan. He can score in the low post.”

Key played a huge role in the middle stages of the second half, as Duke went on an ice cold 1-for-14 stretch from the field. The Blue Devils attacked the rim all night as they finished with 38 points in the paint, but Key’s physical presence down low, becoming a wall on the dribble drive and post-up attempts, led to a good portion of those misses.

However, that’s not to shortchange his role on the offensive end during that same period.

For a 2-minute, 43-second stretch in the second half, Key scored seven of the Buckeyes’ nine tallies, including a stretch of six-straight Ohio State points.

“He had really a good game. Very methodical and powerful,” Krzyzewski said.

Holtmann said Key’s “body composition is the best it’s been,” contributing heavily to his career-high 27 minutes, and Key said being down to 252 pounds helped him with a close-out play on the defensive end.

Despite being undersized at 6-foot-8, compared to Big Ten centers Illinois junior Kofi Cockburn and Michigan sophomore Hunter Dickinson, Key will have to wear them down physically to tire them out and have success — a formula he executed to perfection against Duke sophomore center Mark Williams.

“I just got to use my body and physicality, and the coaches said, ‘You just got to be physical and you’re going to get your way,’ ” Key said.