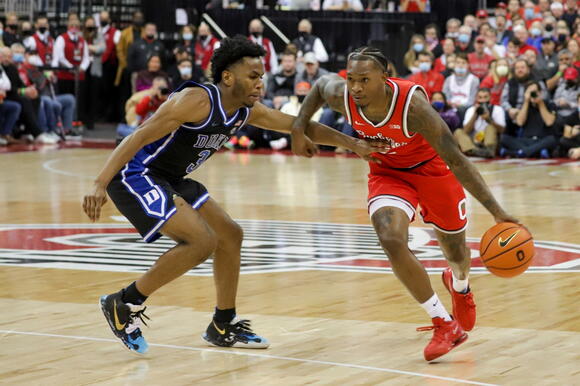 With less than seven minutes remaining against No. 1 Duke Tuesday, the Buckeyes looked up to see a double-digit deficit plastered on the Schottenstein Center jumbotron.

From that point, Ohio State surged on a 20-4 run while holding the Blue Devils without a bucket for the last 4:29 of regulation to erase an 11-point lead. Duke head coach Mike Krzyzewski pointed to the Buckeyes’ continued effort as a primary reason for Ohio State’s late comeback.

“Played really hard. They played really good defense. I thought they wore us out, we were worn out at the end,” Krzyzewski said. “We had 23 fouls. I think part of that shows being tired. Just not playing with the same footspeed that we normally do.”

Kickstarting the Buckeyes’ late-game run was freshman guard Malaki Branham, who took Duke freshman forward Paolo Banchero — a projected top pick in the 2022 NBA draft — off of the dribble and went up-and-under for a reverse layup to draw Ohio State within nine points.

After Branham’s difficult layup, sophomore forward Zed Key scored Ohio State’s next six points, but the Blue Devils were able to keep pace through Key’s scoring flurry, holding a seven-point lead with 4:29 remaining. Key scored 11 of his career-high 20 points in the second half.

Ohio State used a 12-0 run over the next 4:29 to take the game from the clutches of the Blue Devils’ hands. Duke missed its last six attempts of the contest.

With attention to his team’s increased defensive intensity in the game’s waning minutes, Key emphasized that the improvements on that end pushed the Buckeyes past the nation’s top-ranked team.

“We just had to get stops on defense. We were getting a lot of transition points so we had to tighten up our defense,” Key said. “We did that and we got the ‘W.’ ”

As the Buckeyes’ defensive intensity increased, Ohio State received help on the offensive end from an unsung hero.

Graduate transfer guard Cedric Russell — who entered Wednesday’s game with just 23 minutes played in a Buckeye uniform — scored four quick points to drop the Duke lead to 66-65. Russell’s second-half scoring was punctuated by a deadly corner 3-pointer, which he hit in the eye of Duke junior forward Wendell Moore Jr. with 2:32 remaining.

“Cedric had a look in his eyes; he wanted to stay aggressive,” Ohio State head coach Chris Holtmann said. “Ced’s ability to step up, with that dagger 3 that he hit there in the corner.”

Russell also hit a pair of free throws to put the Buckeyes up five points with three seconds left, ultimately putting Duke out of arm’s reach. The Alexandria, Louisiana, native scored nine of his 12 points in the second half, while hitting all three of his 3-point attempts.

Star junior forward E.J. Liddell also got in on the late-game fun, hitting a pair of free throws with 1:03 remaining to tie the game and put the Buckeyes up one — a lead that they never relinquished.

Liddell wasn’t done there. The Belleville, Illinois, native drove to his left before stopping on a dime and using his body to create separation on Moore, drilling a shot from the elbow to give Ohio State a 3-point lead with 15.4 seconds left.

Holtmann praised Liddell for his late-game emergence and said he made some key plays down the stretch to help push the Buckeyes to victory.

“I told him at halftime, ‘Nobody out there is better than you,’ and, ‘Be that guy in the second half,’ ” Holtmann said. “He’s an absolute warrior.”

Entering Tuesday’s game, Ohio State was already battle-tested in late-game scenarios with four of their first six games ending within a margin of six points. Three of the Buckeyes’ games were decided in the last five seconds, with last-second wins over Akron and Seton Hall and a buzzer-beating loss to Florida.

Key pointed to Ohio State’s prior experience in tight games as something that helped them push past the Blue Devils and will help them once Big Ten play rolls around.