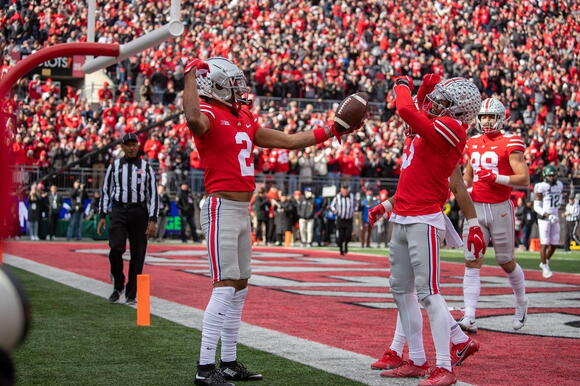 The top scoring offense in the Big Ten added some hardware Wednesday following the announcement of all-conference teams, in which nine Buckeyes earned spots.

In his first season as a starter, redshirt freshman quarterback C.J. Stroud earned First Team honors from both the coaches and media ballots. Stroud led the Big Ten in passing touchdowns and yards, averaging more than 351 yards per game and totaling 38 scores. He earned seven Big Ten Freshman of the Week awards during the regular season.

Offensive linemen Thayer Munford and Nicholas Petit-Frere were the other two Buckeyes who earned First Team selections. The two played alongside one another primarily with Munford at left guard and Petit-Frere at left tackle. Interestingly, the pair started at both tackle positions in 2020.

No. 7 Ohio State’s highly-touted “three-headed monster” at wide receiver saw all three wideouts named to All-Big Ten Teams, led by senior Chris Olave who earned First Team honors from the coaches for the second season in a row while capturing the program record for most receiving touchdowns .

Buckeyes’ 1,000-yard receivers sophomore Jaxon Smith-Njigba picked up his first all-conference brass when named to the Third Team while junior Garrett Wilson was named to the Second Team.

Already with several Ohio State program records for freshmen broken, including most rushing yards in a single game and touchdowns scored in a season , running back TreVeyon Henderson earned his first all-conference hardware. He was voted to the Second Team-All Big Ten by both coaches and media, recording over 1,000 rushing yards and 19 touchdowns.

Similarly, junior offensive lineman Dawand Jones excelled in his first season as a starter at right tackle, a position previously held by Petit-Frere for much of 2020. Jones played in all 12 games, starting 11, and made his 6-foot-8 presence known by helping the Buckeyes average over 186 yards on the ground per game.

Senior tight end Jeremy Ruckert earned his first All-Big Ten selection with his placement among honorable mentions. The New York native caught 284 yards and three touchdowns, moving Ruckert just behind Jake Stoneburner for most scores in a career by a Buckeyes tight end.

The complete list of Buckeyes honorees among the coaches and media selections is below: