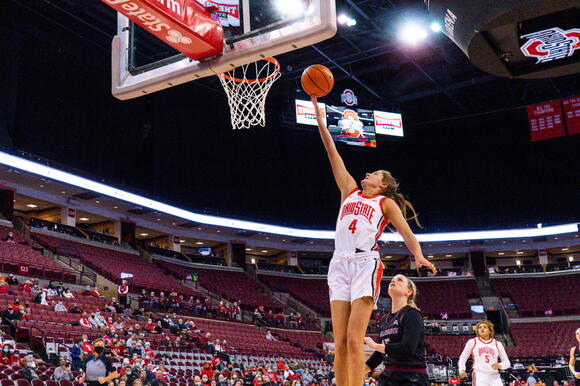 After starting the season with five convincing home victories, the No. 18 Ohio State women’s basketball team will take its undefeated record and top-ranked scoring offense on the road this week for a battle with two power-five opponents.

The Buckeyes (5-0, 0-0 in Big Ten) will begin their road trip Wednesday when they take on Syracuse (3-4, 0-1 Atlantic Coast Conference) at the Carrier Dome as part of the annual Big Ten/ACC challenge.

Playing in front of a road crowd for the first time since Feb. 29, 2020, head coach Kevin McGuff said his team, which features four upperclassmen in its starting lineup, has the veteran experience and leadership in place to compete in hostile road environments.

“We’ll see what happens,” McGuff said. “You never really know until you get out there and do it, but I do think we are built with enough experience that we can handle it.”

Aside from the opposing crowd, Ohio State will also need to prepare for the Orange team that has shown inconsistent plays after an offseason filled with coaching and roster overhaul.

Although Syracuse’s roster may still be getting acclimated to each other, the ACC opponent could present challenges with its defensive pressure, as the Orange have forced its opponents into 21.1 turnovers a game, along with 57 steals.

Senior guard Taylor Mikesell, who has just seven turnovers in five games, said her team will need to take care of the ball and make smart decisions against the Orange’s full-court press — something the team has stressed during practice this week.

“That’s been a big emphasis for us,” Mikesell said. “They have a really good press and they run a lot of zone, which could mess some teams up. The big thing is taking care of the ball for us and just limiting the turnovers so we can run our offense and not give them easy points on the other end.”

Leading the Orange offense through seven games are senior guards Chrislyn and Christianna Carr, who come into Wednesday’s matchup averaging 14 and 13 points, respectively. The two guards have also stuffed the stat sheets on both ends of the court, combining for 54 rebounds and 21 steals.

After heading northeast to battle with the Orange, the Buckeyes will kick off Big Ten play Sunday when they travel to West Lafayette, Indiana, for a matchup with Purdue (5-2, 0-0 in Big Ten).

The Boilermakers feature a balanced scoring attack, with four players averaging double-digit points through seven games. Among those top performers is sophomore guard Madison Layden, who leads Purdue with 13 points and 6.1 rebounds a game.

Although the Buckeyes have cruised their way to five home victories to start the season, Mikesell said she is looking forward to the challenge that may come with playing on the road this week, as it could force her team to battle through adversity before they enter the meat of the non-conference and Big Ten schedule.

“Getting on the road already presents its own obstacles,” Mikesell said. “[It’s a] different arena, totally different set up, different place that we have never played in before. I think it should be a really good test to see how we respond to that potential adversity up front.”