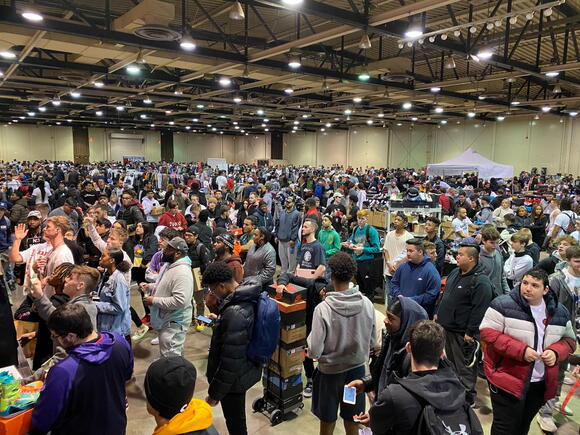 Sneaker Freaks is a biannual event that unites sneaker lovers and serves as a place for people to buy and sell sought-after footwear. Credit: Courtesy of Travis Walker

To some, shoes are an inconsequential addition to everyday attire. However, to the co-owners of Columbus sneaker convention Sneaker Freaks, shoes are more than an accessory.

Sneaker Freaks , a biannual Columbus event, will allow patrons to buy and sell sneakers Dec. 5 from 1-6 p.m. in the Lausche Building at the Ohio State Fairgrounds. What started as admiration for NBA players’ sneakers has blossomed into a statewide event that has united the community through a passion for shoes since 2013, Jermaine Jenkins, creator and co-owner of Sneaker Freaks, said.

Jenkins said he first left Columbus State Community College as a freshman in 2002 to serve in the Army. When he returned home from Iraq eight years later as a purple heart recipient due to a collision with an explosive device, Jenkins said he struggled with a loss of vision for two months. After regaining his sight, Jenkins said he was confident continuing school was not the right path, and instead looked to other prior passions to fill his time.

“I fell in love with sneakers basically because if you play basketball, you need like a ton of sneakers,” Jenkins said. “I mean, you basically need to be up to date with what every NBA player is rocking or what they’re doing at that time.”

After scouting mall releases of highly anticipated sneakers, especially Jordans, in order to be sure others were as fascinated with these shoes and the culture they belonged to as he was, Jenkins said he realized how socially significant sneakers are.

From there, Jenkins said, Sneaker Freaks was born. With help from Travis Walker, Columbus native and co-owner of the event, and Dommy Styles and DJ D Boogie, radio announcers on station 107.5, the Sneaker Freaks team was able to prepare its first convention in only 60 days, Jenkins said.

“I will go to church on Sundays, right before our event, just to pray to make sure we have a good event,” Jenkins said. “But when I came back, I saw parents running with boxes of sneakers like they were afraid they weren’t going to be let in. I was like, ‘I know they’re not running for Sneaker Freaks.’ ”

After their successful first show, Walker said the brand experienced considerable growth in their following conventions.

“From year one to year two, I think we doubled,” Walker said. “Then we were doing 200 vendors and it was the greatest thing in the world. Now, we just did like 325 vendors, which is insane.”

In the nine years since the first Sneaker Freaks convention, the event has only continued on its path of expansion, Jenkins said. He said the team needed to rent out different buildings in order to accommodate increasing numbers of attendees.

Walker said the impact Sneaker Freaks has on children and their families makes all of the challenges running the event worthwhile.

“More than anything, we’ve seen kids that have come through Sneaker Freaks that we met when they were 16, 17 years old, and now they have stores in Columbus and they’re making a bunch of money, and people are in there every day,” Walker said. “It’s so cool to see.”

Walker said the team behind Sneaker Freaks is looking forward to seeing what the future has in store for them.

“I want to finally expand a little bit, go out of state,” Walker said. “We’ve always been a little hesitant just because other events do that a lot, and our whole thing with Sneaker Freaks was to give Columbus something that it was missing. So we’re trying to expand without, you know, kind of losing that home feeling, right? Because it was built in Columbus, for Columbus.”

Tickets for Sneaker Freaks can be purchased for $12 ahead of time or $20 at the door, according to the website .