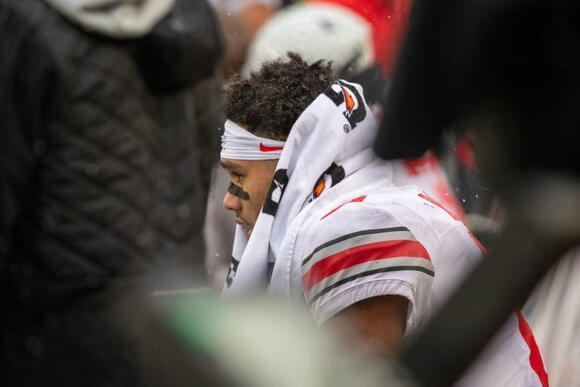 A streak that lasted 3,654 days broke in 60 minutes of play Saturday.

No. 5 Michigan pulled off a 42-27 win over No. 2 Ohio State to earn its first trip to the Big Ten Championship Game and likely end the Buckeyes’ postseason hopes.

Head coach Ryan Day said he feels awful losing to the Buckeyes’ rival for the first time in over 10 years.

“There was so much riding on it,” Day said. “It’s going to leave a mark for a while.”

Not only did the loss erase Ohio State’s hopes of berths in the conference title game or College Football Playoff, but it exposed the shortcomings the Buckeyes may have had in preparation for The Game of which they hadn’t played in two seasons.

Ohio State failed to move the chains on third down more often than not, successfully converting only 44 percent of the time. The Wolverines forced a three-and-out and the Buckeyes punted on back-to-back drives during Ohio State’s first two series of the second half, struggling to regain momentum Michigan held.

The Wolverines ultimately gained an average of eight yards per play compared to the Buckeyes’ 5.8. Ohio State’s offense, which entered No. 1 in scoring and total offense across college football, seemingly played catch up when it typically did the opposite in previous games.

“The worst feeling you could possibly have,” redshirt freshman quarterback C.J. Stroud said. “I know people will probably hate me for it, but at the end of the day, I know deep down in my heart that I put everything — I put my heart and soul, I put my body — on the line. I put everything that I possibly could to win this game. I know every single day that I’m going to keep grinding just to get this win back.”

Individually, Stroud didn’t have a bad game. He made 34 completions, his third-most of the season, for 394 yards while adding two scores on the air. Stroud nearly had his first rushing touchdown of the season during the fourth quarter if not for a holding penalty that negated it.

During halftime, the two teams appeared to exchange words while in the tunnel leading to their respective locker rooms, which are located just across the hallway from one another. Sophomore safety Bryson Shaw said he thought there were moments when the Buckeyes’ emotions overcame them.

“Felt a few times it got the better of us, which is disappointing considering me knowing what kind of guys we have on this team and how much we work the discipline aspect of it,” Shaw said. “Disappointing.”

The Wolverines torched the Buckeyes in the ground game, as Ohio State allowed a season-high 297 rushing yards. Senior running back Hassan Haskins scored five touchdowns and ran for 169 yards himself, finding open holes in the trenches for six rushes of more than 11 yards.

Senior wide receiver Chris Olave caught the Buckeyes’ longest play of the game with a 39-yard completion with just over nine minutes to go in the fourth quarter, but it was too little too late. Olave said the Buckeyes must bounce back by getting back to the drawing board.

“We haven’t been in this position in forever, so I don’t know what to say right now,” Olave said. “It’s tough on us. We prepare so hard, but we didn’t come out with the win.”

Reasons could be pinpointed for the upset defeat, and the shock will likely linger in Ohio State’s locker room. At the end of the day, Day said the Buckeyes just didn’t get the job done against their rival.