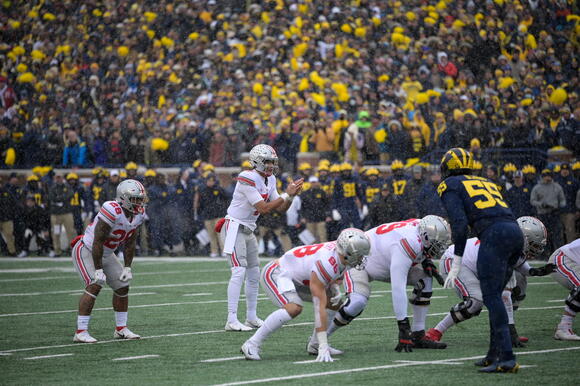 Ryan Day’s offense is predicated on one major factor: staying on schedule.

That factor went out the window Saturday, as the No. 2 Ohio State offense saw poor play from its offensive line — emphasized by pre-snap penalties, a hurried C.J. Stroud and an inconsistent running game. As the Buckeyes’ offensive front struggled, it resulted in their typically dynamic offense getting knocked off track.

Although the Buckeyes didn’t turn the ball over once Saturday, Day pointed to several factors that led to their offensive issues.

Ohio State’s front five committed all seven of the Buckeyes’ offensive penalties against the Wolverines, five of which came before the snap in the form of false starts.

With attention to the pre-snap penalties, Stroud — who said he dealt with an illness throughout the week — pointed to his hoarse voice as a factor for their struggles prior to the snap.

“Whenever you get yourself out of schedule like that, it’s not a good feeling,” Stroud said. “I’m not using this as an excuse, but I lost my voice early in the week. I can’t really yell, so I’m trying my hardest to yell. I don’t really blame my line, I blame it on me.”

Despite Stroud’s hindered voice, Petit-Frere said the Buckeyes’ pre-snap issues do not fall solely on Stroud but lie on the offense as a whole.

“I don’t think he should blame himself, it’s a team effort at the end of the day,” Petit-Frere said. “We talk about this every single week, we talk about it every single day, when we walk on the field the only person that can beat us is ourselves.”

When the Buckeyes were able to get snaps off, they couldn’t keep the Michigan pass rush at bay.

Led by Wolverines senior defensive end Aidan Hutchinson, Stroud was under pressure for much of the 2021 edition of The Game. Hutchinson found Stroud for three sacks and a hurry, while keeping him on his heels for much of the day.

Petit-Frere emphasized Hutchinson’s athletic ability as a factor that makes him difficult to block.

Junior linebacker David Ojabo added pressure against Jones and Petit-Frere, collecting a sack and hurry of his own.

The offensive line’s struggles in the passing game bled into the running game, where Ohio State couldn’t find consistent production.

While freshman running back TreVeyon Henderson sprung free for a 28-yard gain on the Buckeyes’ first scoring drive, he was largely shut down by the Michigan front seven. The Hopewell, Virginia, native finished the game with 74 rushing yards on 17 carries and a pair of touchdowns — one through the air and one on the ground.

Day also turned to redshirt freshman Miyan Williams, but he was also held in check, rushing for only 20 yards on seven carries.

Ohio State’s running game faltered, and Day said the Buckeyes were unable to turn to it in late-game situations.

“I felt like we had to [throw the ball] down the stretch because we weren’t really getting much in the run game,” Day said.

Looking ahead to Ohio State’s uncertain future, Petit-Frere said the Buckeyes need to use this difficult loss as a learning experience.

“The way that we deal with it is that we learn,” Petit-Frere said. “It’s something that we can learn from, that we can overcome.”