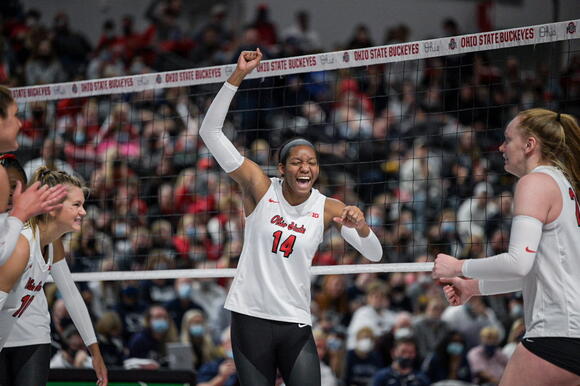 The No. 9 Ohio State women’s volleyball team won 3-0 against Maryland to conclude Big Ten play and move up to fourth place in the conference standings Friday.

Maryland (19-12) entered the match 7-11 in the Big Ten Conference, which put the Terrapins in ninth place in the standings. Ohio State (25-5) was 15-5 in the all-time series with Maryland, including a sweep Oct. 2 in Columbus.

Ohio State was first to take a lead in set one after a kill by junior outside hitter Gabby Gonzales, 6-2. A kill by graduate outside hitter Paula Neciporuka helped bring Maryland back within two points, 11-9, but another kill by Gonzales helped widen the Buckeyes lead, 15-11.

The Terrapins fought back, but a service ace by sophomore middle blocker Rylee Rader forced Maryland to take a timeout, 17-12. Out of the break, a kill by sophomore outside hitter Sam Csire gave the Terrapins some energy. However, Ohio State was able to take set one from a kill by Rader, 25-19.

It was point-for-point in set two with neither team able to get more than a two-point lead. Ohio State was first to widen its lead after a kill by junior outside hitter Jenaisya Moore, but a 3-0 service run by freshman libero Milan Gomillion brought Maryland back to tie the set at 16-all.

The set remained back-and-forth until a 4-0 service run by senior defensive specialist Hannah Gruensfelder gave Ohio State a 23-20 lead. Maryland fought back with a service ace by Csire, but Ohio State was able to take the second set, 25-23.

It was another point-for-point battle to start the third set with neither team taking more than a one-point lead until a kill by Gonzales put Ohio State up 11-9. However, a kill by Neciporuka helped tie the set up at 14-all.

It was not until a block by sophomore opposite hitter Emily Londot and freshman middle hitter Arica Davis that the Buckeyes ran away with the third set. Gruensfelder went on an incredible 7-0 service run to put the Buckeyes up 21-16. Ohio State was able to take care of the set from there, 25-18.

The win helped Ohio State finish the regular season 15-5 in conference play. The NCAA Tournament Selection Show is Sunday at 8:30 p.m. on ESPNU.