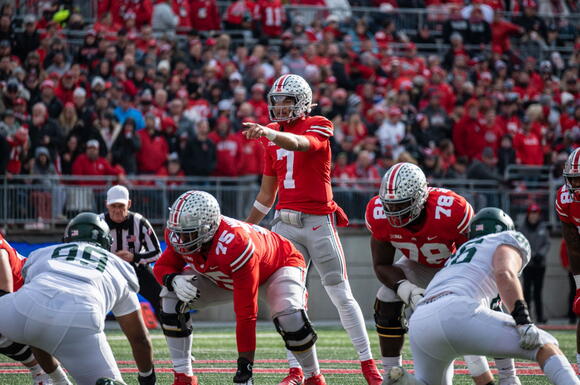 Come noon Saturday, the clock will strike a time many have waited 727 days for.

At the surface, the winner prevails over their bitter rival for the first time since 2019, with the 2020 matchup canceled due to the pandemic. The bigger picture, though, earns the victor a trip to Indianapolis with a berth in the Big Ten Championship Game.

The Buckeyes are familiar with Lucas Oil Stadium, having gone to the last four conference title games. The Wolverines have yet to advance to the Big Ten Championship. With so much to play for, head coach Ryan Day said there’s not so much extra motivation , but anticipation.

“We work it year round. Every day we work it,” Day said. “We just constantly talk about it and we talk about it in recruiting. They understand what a huge week this is for so many reasons.”

Looking up north, a pair of dynamic duos, on both sides of the ball, have paced Michigan through its one-loss season.

Offensively, the running back rotation of senior Hassan Haskins and sophomore Blake Corum leads the Wolverines’ top-flight rushing attack. Haskins and Corum have helped Michigan to 218.4 rushing yards per game — the second-best mark in the Big Ten — and 29 rushing touchdowns, a conference-best.

Haskins plays the feature role between the two and is one of four 1,000-yard rushers in the Big Ten. The St. Louis native has gashed opposing defenses for 1,063 yards and 13 rushing touchdowns.

Corum’s status for Saturday’s contest is still in the air according to Michigan head coach Jim Harbaugh , but if he’s able to play, he will certainly have an impact on the final outcome. The sophomore has rushed for 778 yards and 10 touchdowns, while snagging 20 receptions for 137 yards and a touchdown through 11 games.

“They’re a run-heavy team; they like to stay on schedule,” junior defensive end Zach Harrison said. “We got to do a good job of keeping them off schedule.”

Ojabo and Hutchinson’s efforts have allowed the Wolverines to collect the fourth-most sacks in the Big Ten and hold opposing offenses to 306.1 yards per game — the third-best mark in the conference.

While Michigan’s offensive and defensive pairings provide a distinct challenge for the Buckeyes, the Wolverines also boast one of the best offensive lines in the country.

Michigan’s front five was named a semifinalist for the Joe Moore award Tuesday — alongside Ohio State’s offensive line. The Wolverines have allowed just nine sacks on the season, the least amount in the Big Ten.

Behind a typically clean pocket, junior quarterback Cade McNamara has put together a solid season despite injuries to top targets Ronnie Bell and Roman Wilson. McNamara has thrown for 2,142 yards and 14 touchdowns.

McNamara isn’t the only quarterback that impacts the Michigan offense, as Harbaugh also rotates freshman J.J. McCarthy into the game. McCarthy has completed 68.5 percent of his 38 attempts for 348 yards and four touchdowns.

“[McCarthy] has a little bit of that dual threat, so it seems like they’ve kind of done a little bit when he’s in the game, but he can also throw the ball really well,” Day said. “At the end of the day, we’re not going to change what we do defensively based on who’s in the game. They don’t have that much of a different package.”

Ohio State’s defense has dramatically improved since its Week 2 loss to then-No. 12 Oregon. The Buckeyes have held their last three opponents to 18.3 points per game, including limiting then-No. 7 Michigan State to just seven points a week ago.

Offensively, Ohio State appears unstoppable. The Buckeyes scored touchdowns on their first seven possessions against the Spartans and currently lead the country with the No. 1 total and scoring offense.

The growth of redshirt freshman quarterback C.J. Stroud has largely driven the potency of Ohio State’s offense. Last time out, Stroud threw for 432 yards and a program record-tying six touchdowns, mostly in just over a half of play.

Stroud connected with his triple-threat trio of wideouts — despite none of whom were named a Biletnikoff Award finalist for most outstanding receiver — often enough against the Spartans that each caught over 100 yards, marking just the second instance in program history.

“We got so many weapons and so much talent around the field at every position,” Olave said. “I feel like when we go into a game the only person that could stop us is us.”

Although the Big Ten Championship and College Football Playoff loom large around Saturday, Day said Ohio State isn’t looking beyond anything other than The Game.

“You don’t know what that scoreboard is going to look like. It isn’t about anything other than winning the game,” Day said. “Whatever you think is best at that time, you got to do.”

The Buckeyes and Wolverines will renew their rivalry at noon Saturday. The Game will broadcast on FOX.