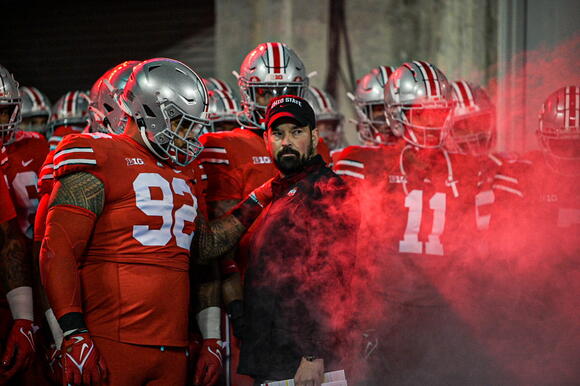 The last time Michigan ended a football game with more points than Ohio State, I was in the midst of my final year of elementary school, getting ready for winter break and travel basketball tryouts.

First, it was Denard Robinson, the speedy Wolverine quarterback who got the job done in 2011 — against an Ohio State team with an interim head coach and plenty of internal drama, mind you –– but couldn’t recreate the magic the following season.

Then, after former head coach Brady Hoke’s abrupt downfall, came the supposed Michigan savior and current head coach, Jim Harbaugh. We all know how that has played out.

The list goes on. From former Wolverine defensive coordinator Don Brown and his mighty defense, to a rotating carousel of quarterbacks, no one from Ann Arbor, Michigan, has been able to topple the Buckeyes on the gridiron in a decade.

There have been close calls, like when the Buckeyes stopped a Michigan two-point conversion with 32 seconds left to escape The Big House in 2013, or when J.T. Barrett and Curtis Samuel saved Ohio State in a 2016 double overtime classic.

But in the end, Michigan has fallen short time and time again. I never witnessed a Wolverine win in middle school or high school, and I’ve yet to experience anything close to such a sensation in college.

In fact, it seems like the gap between these two proud programs has only widened.

Under current head coach Ryan Day, Ohio State has suffered a grand total of three losses in two-plus seasons. Michigan has nine losses in that same period of time.

Only two Michigan quarterbacks have thrown for 22 touchdowns or more in a single season since 2011. Ohio State quarterback Justin Fields tossed for 22 scores in eight total games last year.

The recruiting gap is widening dramatically, too. The Buckeyes brought in seven five-star recruits this year alone , according to 247Sports. Michigan has earned commitments from just six five-stars total since Harbaugh took over in December 2014.

That was a very long-winded way of saying something that has become crystal clear the past few seasons: Ohio State has made its way to the ranks of college football’s truly elite, while Michigan is simply treading water, hoping for a miracle from Harbaugh and company.

Still, in no way should any Buckeye fan write off this year’s edition of The Game due to past results or a growing imbalance between the two sides.

No matter what the trends, stats or rankings say, Ohio State versus Michigan will always be a closely contested battle. That’s the way rivalries work.

Michigan enters Thanksgiving weekend with a powerful duo of running backs, a quarterback who has done just enough to keep the ball moving consistently and a top-tier defense led by a dominant front five.

Like Harbaugh’s best teams of the past, this is a group that prides itself on defensive physicality and grinding out games on offense. It knows its own limitations and plays to its very obvious strengths: controlling the tempo of games with a ground-and-pound mindset.

In decades past, these characteristics would make the Wolverines a difficult matchup for Ohio State — especially this Ohio State team, which has had more than its fair share of breakdowns against the run and short-pass game.

But gone are the days of Ohio State relying on its defense to win games.

In TreVeyon Henderson, Chris Olave, Jaxon Smith-Njigba and Garrett Wilson — plus a few more — the Buckeyes have unmatched talent at their disposal.

It will not matter how successful the methodical Michigan offense fares against an unpredictable Buckeye defense. Despite their defensive numbers, the Wolverines haven’t seen anything close to this Ohio State offense and will have no answers come Saturday afternoon.

With Day at the helm, a gluttony of weapons on offense and a young quarterback who has shown oodles of potential in big games, Michigan just can’t keep up with the Buckeyes. Such has been the theme these past few years.

Ohio State has adapted to the new world of college football, one focused on high-powered offenses led by gunslinging quarterbacks and innovative playcallers. Michigan has not.

Simply put, we’re not in elementary school anymore, coach Harbaugh. On Saturday, that will be made clear once more.