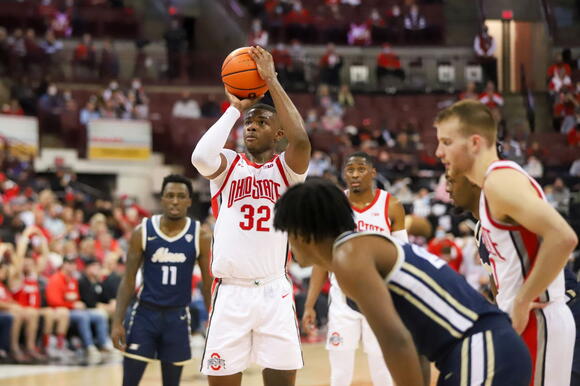 Prior to freshman guard Meechie Johnson Jr.’s 3-point dagger with 2.3 seconds to go in Ohio State’s 79-76 win against No. 21 Seton Hall, the Buckeyes were on an abysmal 5:32 stretch without a field goal falling.

The previous eight Ohio State points to keep them in the game at the end came from the charity stripe. Four came from junior forward E.J. Liddell, graduate forward Kyle Young added three more and graduate guard Jimmy Sotos went 1-for-2 with 1:50 to go.

The Buckeyes went 22-for-25 from the free-throw line, knocking down their shots at an 88 percent clip — 16.8 percent higher than the season 71.4 percent they entered the game at.

The Buckeyes got back on track Monday against the Pirates, getting to the charity stripe 25 times — the second-highest mark for the Buckeyes who went to the free-throw line 30 times against Niagara Nov. 12.

The problem with the Niagara game, though, is that Ohio State only knocked down 67 percent of its shots from the stripe, failing to convert on 10 of its free throw opportunities.

In the season opener against Akron, the Buckeyes matched their 11-for-16 mark that they hit against Indianapolis in the preseason exhibition Nov. 1. If you add another made free throw here or there, then sophomore forward Zed Key’s late-game heroics would not have been necessary.

Since the second game, it has been a steady climb for Ohio State’s free-throw percentages, from 67 percent against Niagara to 71.4 percent against Bowling Green before hitting 84.6 percent of its shots versus Xavier Thursday.

Of the variety of holes the Buckeyes have shown in the young 2021 season, the one area of their game that has shown steady improvement is their free-throw shooting.

Against the Pirates, they got significant contributions from everyone who stepped to the line, led by Liddell’s incredible 10-for-10 night with Young’s 7-for-8 clip.

Liddell has shown borderline offensive mastery in the first five games, scoring 25 points in three of those contests. After going through the NBA Draft process before returning for his junior year, the one aspect of his game that needs to dramatically improve before going to the league is his free-throw shooting.

He joked after the Akron game that Shaquille O’Neal was his favorite big man, poking fun and drawing comparisons between the Hall of Famer’s inability to hit his free throws and his own struggles against the Zips.

Coming into Monday’s matchup, Liddell led the team with 23 free-throw attempts, but he only made 14 for a dismal 60.9 percent from the line. With his offensive dominance, he’ll get his opportunities, so repeating Monday’s perfect performance from the stripe is a must for Ohio State’s success.

The only Buckeyes who have proven their ability to make their free throws when given the opportunity are Young and Johnson, who are 13-for-14 and 8-for-9, respectively, in 2021.

As the season progresses and Ohio State — who has already suffered a loss and dropped from the rankings — continues their climb back to success, shooting well from the charity stripe will be at the forefront with Liddell, Young and Key’s offensive presence in the paint.

Against teams like No. 5 Duke and other Big Ten foes, their new free-throw percentage of 72.5 isn’t going to cut it.