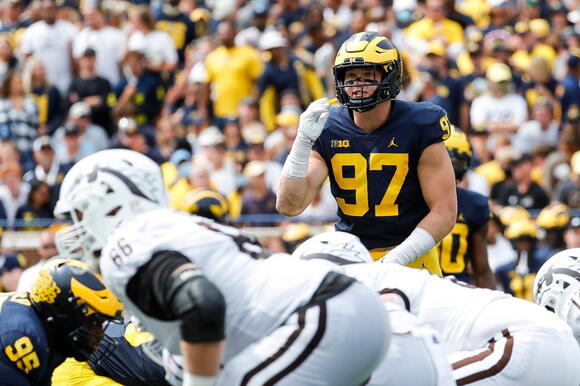 Michigan senior defensive end Aidan Hutchinson (97) talks to teammates before a play against Western Michigan during the first half Saturday, Sept. 4, 2021 at Michigan Stadium in Ann Arbor. Credit: Courtesy of TNS

It’s been a bizarre but successful season for No. 2 Ohio State’s offensive line thus far, but the dynamic edge rush duo of No. 5 Michigan’s senior Aidan Hutchinson and junior David Ojabo will look to throw the Buckeyes off track.

Operating with four natural offensive tackles — with sophomore Paris Johnson Jr. and graduate Thayer Munford playing guard — and instating a six-man rotation that includes junior guard Matt Jones, the Buckeyes have been solid on the ground and excellent in pass protection. Hutchinson and Ojabo have become one of the most feared pass-rushing duos in the country, giving opposing offensive lines fits all year.

Ohio State’s offensive line has been one of the best in the nation this season and was named as a semifinalist for the Joe Moore Award — which is given to the best collective offensive line in college football — Tuesday.

In the running game, the Buckeyes’ front has helped freshman running back TreVeyon Henderson become one of four Big Ten running backs to rush for over 1,000 yards on the season. Ohio State ranks fourth in the conference in rush yards with 197.3 yards per game.

The Buckeyes’ dominant passing attack has largely thrived thanks to the offensive line creating clean pockets for redshirt freshman quarterback C.J. Stroud to fire from. Ohio State has only allowed 13 sacks this season, which ranks second in the Big Ten behind Michigan.

As Ohio State has already handled talented defensive linemen throughout the season — including Purdue junior defensive end George Karlaftis — Petit-Frere said those bouts have helped them prepare for the dynamic duo of Hutchinson and Ojabo.

“We’ve had a really good stretch of games here in November and October, as well that we’ve had some amazing pass rushers that we’ve had to go against as a team,” Petit-Frere said. “The Big Ten this year has really had a great time showing how good defenses are in Big Ten country.”

While the Buckeyes’ offensive line has shown out, Hutchinson and Ojabo provide a challenge for Ohio State’s front.

The pair has accounted for 68.9 percent of Michigan’s sacks this season, as they have each found the quarterback 10 times through 11 games.

Ojabo has done much of his damage in some of Michigan’s biggest games this season, collecting multi-sack games against Wisconsin, Michigan State and Penn State. Hutchinson picked up more than half of his sacks against Washington and Penn State, finding the quarterback two and a half times against the Huskies and three times versus the Nittany Lions.

With a focus on his fellow pass rushers, Ohio State junior defensive end Zach Harrison said they’re both great at their craft.

“They’re both really good players. 97, Aidan, he’s a senior and he’s a big, strong and physical guy,” Harrison said. “David Ojabo, he’s the same way. He’s a long, bendy guy who can get around the edge.” 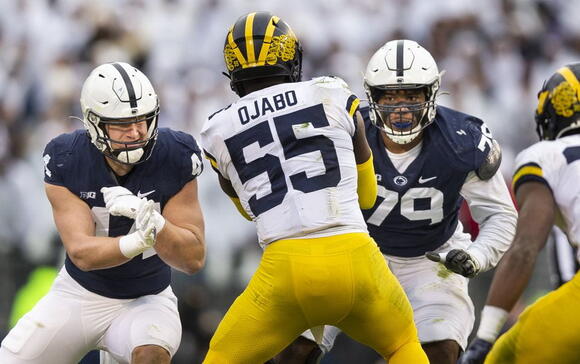 While both guys have matched each others’ sack output, Hutchinson holds the lead in quarterback hits with nine. Ojabo follows close behind with six.

Both guys also make an impact in pass defense when the ball is in the air; each garnering three pass breakups.

Petit-Frere said that he and junior offensive tackle Dawand Jones recognize the challenge that lies ahead of them as Hutchinson and Ojabo tend to switch sides for a majority of the game.

As the Buckeyes’ offensive front faces their most difficult challenge to date, head coach Ryan Day said the offensive line will need to be on the ball Saturday.