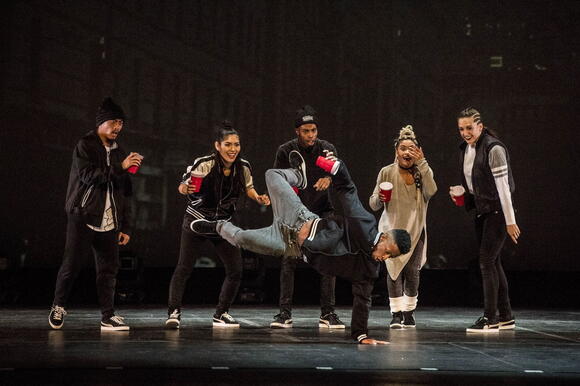 Columbus Association for the Performing Arts will present The Hip Hop Nutcracker at the Palace Theatre Dec. 4 Credit: Courtesy of Timothy Norris

A contemporary version of the  Christmas classic “The Nutcracker” will return to the Palace Theatre for the holiday season.

Drawing inspiration from E.T.A. Hoffmann’s 1816 tale,  “The Hip Hop Nutcracker” will be hosted by the Columbus Association for the Performing Arts Dec. 4. The show fuses hip-hop and classic genres of music together, reconceptualizing Pyotr Ilyich Tchaikovsky’s 1892 ballet “The Nutcracker,” according to the association’s website .

Rich Corsi, vice president of programming for the association, said this will be the fourth time “The Hip Hop Nutcracker” has come to Columbus.

“It’s been an amazing run,” Corsi said. “The good thing is a lot of people who have seen it love this so much that they come back every year, but then there’s also people who have not seen it, and I think that’s the reason we have such great numbers when we put this up on sale.”

The show will include live music, dancing and similar characteristics to “The Nutcracker,” such as the use of Tchaikovsky’s score, Corsi said. According to the Hip Hop Nutcracker website , the cast includes all-star dancers Gabriel Emphasis and Ann-Sylvia Clark, violinist Jarvis L. Benson and a DJ.

Kurtis Blow, a rapper known for his hits “Christmas Rappin’” and “The Breaks,” said he will serve as the show’s special guest emcee and will open the show with a short set. He said by combining hip-hop and classical genres of music, the show mirrors what he himself did in his early music by fusing rock ‘n’ roll and rap.

“This is a modern version of the original,” Blow said. “I’ve been an avid supporter of fusing different genres of music ever since my first album.”

Coming off of a year filled with health-related complications, including a heart transplant, Blow said he is feeling more grateful than ever to be given a second chance at life.

Corsi said having Blow as the emcee for the show throughout the years has made the experience more entertaining and energetic.

“I’ve never seen anyone with so much energy, and he just really took this show to the next level,” Corsi said. “So we were very happy with the choice we made with having Kurtis on the show.”

Blow said emceeing for “The Hip Hop Nutcracker” is one way he wants to make the most of his days. He said he now sees a purpose in every day, especially after all of the health issues he has overcome.

“Every day when I wake up, I’m thankful and it’s unbelievable I’m still alive,” Blow said. “I’m still here. You heard the saying ‘any day above ground is a good day,’ right? So every day from this point on is a great day for me.”