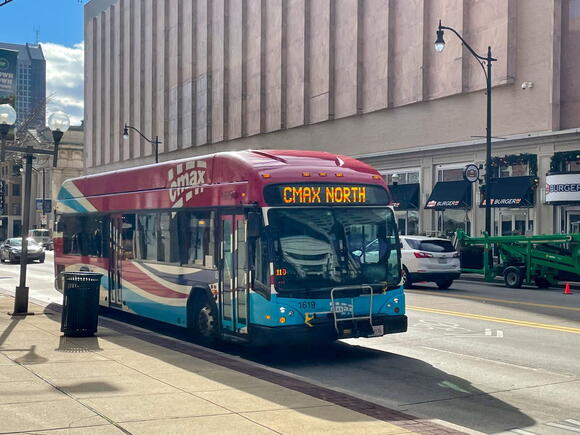 President Joe Biden signed a $1.2 billion infrastructure package Nov. 15 that boosted funding for everything from roads to broadband internet, which allows faster transmission of large data.

For Columbus, this could mean a number of things — including highway improvements, a new COTA bus route that will serve West Campus and more electric buses on the streets, according to the White House’s website .

“We have two projects in the pipeline that can benefit from this type of funding, and the third will be entered into the pipeline by mid-year next year,” Patrick Harris, assistant vice president of external relations for COTA, said. “That third high-frequency, high-capacity corridor will likely be along Olentangy River Road and would include direct access to Ohio State’s Innovation District on West Campus.”

Harris said the two other projects include the construction of two bus rapid transit systems — buses that have increased capacity — along West Broad and East Main streets.

Matt Bruning, communications director for the Ohio Department of Transportation, said it is too early for specifics as to how the money will be spent.

“After we get some clarity from the federal government about how the funds will be distributed and can be used, we’ll be working with Gov. Mike DeWine and Lt. Gov. Jon Husted’s offices to determine where to best invest them,” Bruning said.

According to a Tuesday press release from Ohio Sen. Rob Portman’s website , Ohio is in line for over $9 billion for highway improvements and $483 billion for bridge repair and replacement over five years. The state is also projected to receive $100 million for expanded broadband internet, $253 million for airport improvements, over $1 billion for public transportation and $1.4 billion for water infrastructure improvements.

According to the American Road and Transportation Builders Association’s latest report , over 1,300 bridges are considered “structurally deficient.”

According to the bill , one of the requirements for federal aid is that administrators of funds, like COTA, would need to open application windows for projects, such as bus replacements. They would also need to gather data and background on those projects and how they would help the populations they serve.

The bill also dictates that funding is based on criteria such as population — or for other items and users such as how many people ride the buses.

Harris said COTA also plans to use federal dollars for bus replacement and to aid the transition of all the buses to zero emission vehicles by 2025.

According to COTA’s Sustainability Report , COTA hasn’t purchased a diesel bus since 2012, purchasing its first hybrid vehicles in 2010 and fully switching to compressed natural gas in 2013 — with its first natural gas vehicles going out on the street in May of that year.

COTA then put its first two electric vehicles into service in September — with testing being done in partnership with Ohio State’s Center for Automotive Research and the Transportation Research Center.

According to The White House , 16 percent of transit vehicles, including buses, in Ohio are beyond their useful life which, according to the Federal Transit Administration , is 12 years.

“This infrastructure package included the reauthorization of surface transportation spending,” Harris said. “COTA will look to competitive grant programs which allows us to transform how people will move in this region.”