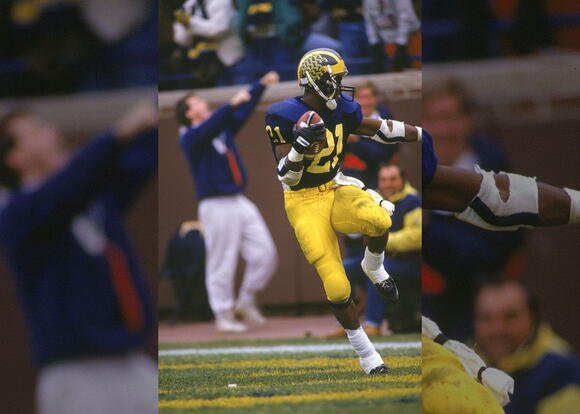 Following a 93-yard punt return for a touchdown in the second quarter, Wolverines wide receiver Desmond Howard ran toward the back of the end zone and lifted his leg and held out his arm — just like the Heisman Trophy he eventually won. Credit: Chris Covatta/Getty Images via TNS

Woven in the history of The Game, iconic memories and plays are littered throughout for both Michigan and Ohio State.

Tuesday marks the 30th anniversary of one such moment.

Following a 93-yard punt return for a touchdown in the second quarter, Wolverines wide receiver Desmond Howard ran toward the back of the end zone. He lifted his leg and held out his arm — just like the Heisman Trophy that Howard ultimately earned at the end of the 1991 season.

“That moment right there is so special and so unique. You’re just doing what you’re doing in the moment,” Howard said. “Probably the most iconic post-touchdown celebration in college football. I’m just very fortunate it happened during The Game.”

Howard’s Heisman pose is just one page in the many chapters that tell the story of the rivalry between the Buckeyes and Wolverines.

Former Ohio State quarterback Kirk Herbstreit played during that game in 1991, completing eight passes for 82 yards. He recalled his memories of The Game, particularly his broadcast of the 2006 edition where the No. 1 Buckeyes defeated the No. 2 Wolverines 42-39 at Ohio Stadium.

“You were literally on the edge of your seat every possession, every play because of the game itself, and then what was at stake when No. 1 was playing No. 2,” Herbstreit said.

Even though he’s a Buckeye through and through, Herbstreit said he gets a lot of grief because he roots for Michigan — just up until The Game in November.

Herbstreit said his father taught him to pull for the Wolverines when they’re not playing Ohio State. Then, when the two teams meet on the football field, Herbstreit wants to see the Buckeyes come out on top.

“He was big on, ‘They’re representing the Big Ten.’ He just brainwashed me to be that way,” Herbstreit said. “Like, let’s all beat everybody and then let’s go at it for 60 minutes and see who the better team is. That’s the way I was trained, that’s the way I still look at that game and that’s what I hope for every single year.”

Herbstreit and Howard, like all college football fans, will see the return of The Game after COVID-19 issues within the Wolverines’ program forced its cancellation. It marked the first time in 102 years that Michigan and Ohio State didn’t play one another.

The Buckeyes and Wolverines are currently in first and second place, respectively, in the Big Ten East Division. Each will enter Saturday’s game on winning streaks of over three games.

“Just cannot wait. For me, that game, I’m from that generation. I don’t care what the records are every year,” Herbstreit said. “I just love to see the uniforms on the field together. That makes my year.”

Saturday’s matchup will hold plenty of implications for not just the conference title race, but the College Football Playoff scene. Ohio State is currently No. 2 in the AP poll, with Michigan not far behind at No. 6.

A win Saturday would mean Ohio State would earn a berth in the Big Ten Championship Game for the fifth consecutive year. For the Wolverines, it would be their first trip to Indianapolis, the host venue for the conference title game.

Herbstreit said he’s excited for The Game’s return, but not only that: There’s more at stake this season.

“It’s not just Ohio State that has so much on the line,” Herbstreit said. “Michigan, of course, would also have an opportunity to not just try to beat Ohio State after all that they’ve dealt with, but also have a chance to get to Indianapolis.”

Herbstreit and Howard are just two of the legends within the decorated history of The Game. Current players on both the Buckeyes and Wolverines have a chance to etch their names in rivalry lore come Saturday, which will have been 728 days since their last meeting.

Even though Howard said he didn’t expect to strike a Heisman pose, he’s still fortunate it happened. That just shows all it takes is one moment for a Buckeye or Wolverine to create a memory that will last forever.

“You don’t think about that at the time; you’re just out there trying to make a play for your team and trying to walk away with a ‘W’ against your arch rival.”