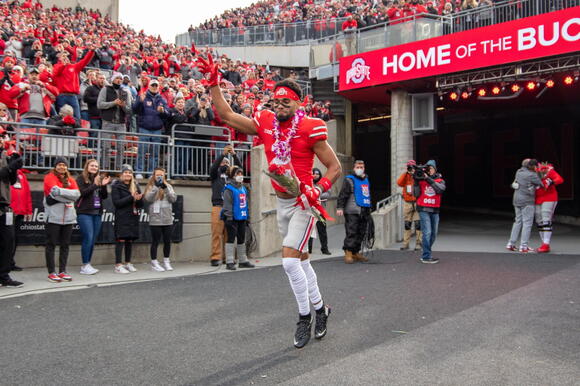 The San Ysidro, California, native passed former Buckeyes wide receiver David Boston for most career-touchdowns in an Ohio State uniform, snagging his 34th and 35th touchdown receptions against No. 7 Michigan State. As Olave joined Ohio State greats as a record-holder in his final game at The Shoe, he mentioned the emotions he felt from senior day.

“I never thought this day would come, it went by so quick. It started off really emotional,” Olave said. “I’m just glad my family was here.”

It was Olave who kicked off the scoring for Ohio State, running a skinny post route out of the slot and blowing by a pair of Spartan defenders while stretching out to haul in a 23-yard touchdown off of the arm of redshirt freshman quarterback C.J. Stroud. The opening drive touchdown brought Olave even with Boston at 34-career scores.

Olave didn’t have to wait long to find the end zone again, running a similar post route and splitting Michigan State’s safeties to break open for a 43-yard touchdown snag in the back of the end zone — breaking Boston’s record in the process.

While Olave didn’t find the end zone for the rest of the day, he still impressed with some acrobatic catches.

With a touch over 10 minutes to go in the second quarter, Olave fired off the ball out of the slot and broke to the outside. As the ball hung in the air towards the sideline, he contorted his body to make a toe-tapping grab at the Spartans’ 1-yard line.

Stroud pointed to a variety of factors that make Olave such a tough cover for opposing secondaries.

“Chris, being a veteran and the older guy in the room, he kind of brings a sense of leadership. But, also he’s a great player,” Stroud said. “He has tremendous speed, his routes are amazing. He always really beats his man.”

Olave finished the day with seven catches for a team-high 140 yards alongside his two record-sealing touchdowns.

With attention to his star senior wideout, Day said Olave’s versatility allows for him to be used in various passing situations for the Buckeyes.

“He’s such a weapon downfield. He did a nice job on a couple of other things today,” Day said. “His run-after-the-catch has been really good. [He’s] just fast.”

While Olave’s touchdown receptions pushed him to the top of the program, it also allowed him to take over the top spot in the nation on the season with 13.

With Olave saying goodbye to Ohio Stadium as a player, sophomore wideout Jaxon Smith-Njigba spoke on the impact that Olave has had on his young Buckeye career.

“It’s an honor. I tell him I appreciate him as much as I can. He just keeps setting the standard and us young guys, we have a path we can follow and that’s all you can ask for,” Smith-Njigba said. “I wouldn’t be here in this position and knowing all the things that I know without Chris.”