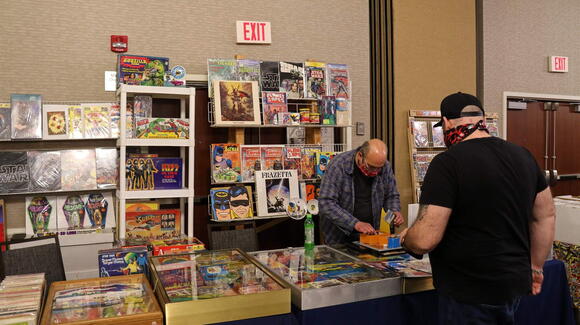 The March 2021 Buckeye Comic Con. The convention happens three times a year– once in the spring, summer and fall. Credit: Courtesy of Eric F. Homan

Instead of prioritizing movies and all things pop culture, this comic convention truly caters to comic book lovers and collectors.

Buckeye Comic Con will open its doors to the public Sunday for its third and final convention of the year after the first two took place March 14 and July 18. The convention, which will be held at Courtyard Columbus West, will feature the original work of comic creators and independent illustrators and collections from local vendors, according to the convention’s Facebook page .

Jeff Harper, a Columbus resident, said he has been the promoter and organizer of Buckeye Comic Con for 26 years. He said he was inspired to promote his own convention after he attended them as a child and found a passion for comics.

“When I was a kid, convenience stores were the only place you could get comic books,” Harper said. “I would ride uptown and use my grass-cutting money to buy comic books, rather than candy, which other kids may have.”

Buckeye Comic Con is unique because it focuses on the comics themselves, Harper said. Other conventions have started to focus more on the movies, actors and pop culture that have been inspired by the original medium.

Jeff Patrick, the owner of World’s Greatest Comics in Westerville and a vendor at the convention, said he was drawn to participate in Buckeye Comic Con because it primarily emphasizes the original, artistic aspect of comics.

“You don’t have the media, celebrities; you don’t have those discussion panels where people are talking about, you know, the latest movies that aren’t even related to comics,” Patrick said. “It’s primarily about the art form itself.”

Adam Fields, owner of Midnight 27 Studios and a comic illustrator at the event, said Buckeye Comic Con gives all types of comic fans the opportunity to see unique works face to face.

“It’s kind of a collector’s dream just to go digging,” Fields said. “We can all go on eBay or type in what we’re looking for and find it, but there’s no fun in that. The fun is what these people are after. They’re wanting to go and hunt.”

Many different genres of comics are presented at Buckeye Comic Con, making hunting for a desired comic easier, Harper said.

“We would always think superhero, but they have crime comics, they have horror comics,” Harper said. “There are some out there now that you can pick up in just about every interest that you have.”

Harper said the increasing popularity of comics over the years is due to the way this medium operates. Many television shows, such as “The Walking Dead” and “Locke and Key,” were originally written as comics before they became popular shows, Harper said.

“These producers are finding out that the comic medium — because they’re basically storyboards — translates fantastic to the screen,” Harper said.

Fields said the comic world has grown monumentally thanks to Hollywood and film and TV adaptations, but that he likes being behind the scenes.

“There’s a whole industry that leads up to what we see in film,” Fields said. “It’s kind of cool to be on the front lines of that.”

Fields said he has seen what comics can do for people, including himself, as they taught him how to read. He also said comics are a great alternative form of entertainment for those who may not be able to consume media the same way others do.

“Not every kid, not every person is going to be able to read novels; they just may not have that attention span, but we want them to read,” Fields said. “So, being able to read a comic book, I think, is just as important as reading a novel.”

Patrick said many people use comics as an outlet to escape everyday pressures. To the Columbus community, comics can serve as a way to bring people together.

“It just comes down to people having a common interest in something that, not to sound corny, but it transcends all the barriers that tend to separate people, like race, gender, even age,” Patrick said. “It’s just the fascination that these characters in these stories generate that attract people, and they gather around that.”

Admission to Buckeye Comic Con is $5 per person and free for children under the age of 6. Parking is free, and a City Classics food truck will be on site from 10 a.m. to 2 p.m., according to its Facebook page .