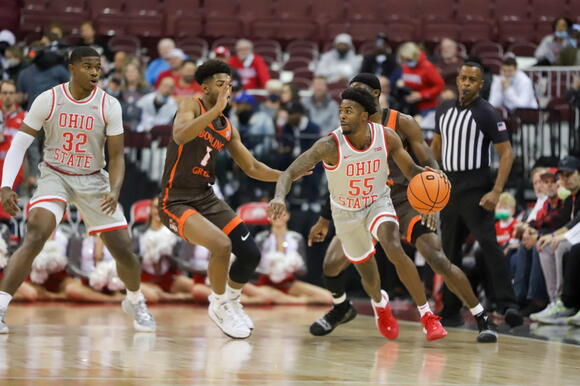 Following less-than-stellar showings in the first two games, the Buckeyes bounced back in a big way with a blowout Monday.

But No. 19 Ohio State (3-0, 0-0 Big Ten) will have a greater challenge at hand Thursday when it continues the Gavitt Games with Xavier. Big East programs jumped out to a 4-0 advantage early in the Games, with No. 4 Michigan and No. 10 Illinois falling to Seton Hall and Marquette, respectively.

Thursday will mark just the fifth all-time meeting between the Buckeyes and Musketeers, continuing Ohio State’s early-season theme of playing in-state opponents. Head coach Chris Holtmann said the Gavitt Games come with the added benefit of rare matchups, and Xavier, led by fourth-year skipper Travis Steele, will be a treat.

“They play hard, they’re well-coached,” Holtmann said. “I know they’re a hungry group. It’ll be a tremendous environment and a great challenge.”

Xavier (2-0, 0-0 Big East) last dispatched Kent State 73-59 Friday, but narrowly defeated Niagara — who lost by 10 to Ohio State — 63-60 in their season opener. The Musketeers collectively shoot 39 percent from the field and an abysmal 25 percent clip from the 3-point line.

The Musketeers landed two transfers from the Big Ten in junior forwards Jerome Hunter from Indiana and Jack Nunge from Iowa. Nunge currently leads the team with a 66.7 shooting percentage, while the 6-foot-8 Hunter has started both games.

“Those were two good additions for Xavier,” graduate forward Kyle Young said. “We’re expecting them to play us really tough. We know how good of a team they are. We’ve been doing a lot of prep.”

The Buckeyes have shot over 51.4 percent in their last two games, something they did just a season ago. Sophomore forward Zed Key has posted double digits in all three games, falling just one rebound short of his second double-double against the Falcons.

They’ve seen an early impact from freshman guard Malaki Branham, who’s averaging 7.3 points per game and started the last two outings. Branham is third on the team with nine field goals made, and said he’s adjusting well to college basketball.

“It’s been good through my first three games,” Branham said. “I always expect good things from myself. I just kept working. When they needed me to start and they called me into the starting lineup, I was ready.”

The Buckeyes must continue to improve defensively, however. They surrendered 12 turnovers themselves against the Falcons, the most so far this season.

According to KenPom , Ohio State ranks 40th in adjusted defensive efficiency, allowing over 91 points per 100 possessions. Graduate guard — and two-time All-Big Ten Defensive Team nominee — Jamari Wheeler has shored up some of the defensive woes, boasting a 12-to-1 assists-to-turnovers ratio.

Ohio State will still be without redshirt senior forward Justice Sueing as he deals with a groin injury. Holtmann, who’s spent plenty of time on the road at Xavier when he coached in the Big East at Butler, said he’ll look for others to fill Sueing’s absence, but it will be difficult in the Buckeyes’ first road game of the season.

“I’ve played in the Cintas Center a number of times and it’s an electric environment,” Holtmann said. “Hopefully we’ll settle in and find a way to focus on the task at hand.”

Ohio State and Xavier will tip off in the Gavitt Games at 6:30 p.m. from the Cintas Center. The contest will be broadcast on FS1.