Football: Wide receivers feed off one another toward success 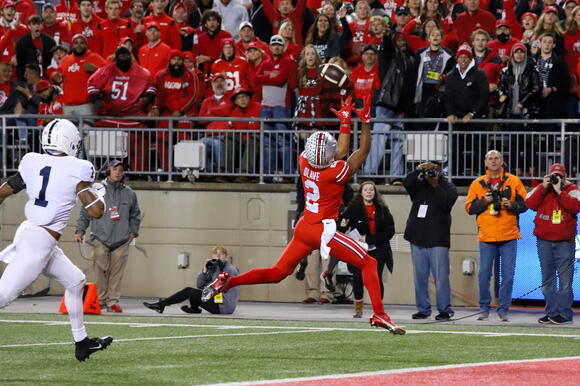 With just two weeks remaining in the regular season, it’s clear that Ohio State’s receiving corps has been a step above the rest.

It’s safe to say that a fair amount of the Buckeyes’ success has come from one of the most talented wide receiver rooms in college football. Players like senior Chris Olave, junior Garrett Wilson, sophomore Jaxon Smith-Njigba and the freshmen duo of Emeka Egbuka and Marvin Harrison Jr. have put up astonishing numbers throughout this season.

“We all compete throughout the week to try and get better every day,” Olave said. “When we show up on the field, we all want each other to get the ball and have fun, make some plays. We’re all happy for each other.”

Through the first 10 games of the 2021-22 season, Ohio State wide receivers have caught 182 receptions for 2,835 yards and 25 touchdowns. These stats did not come easy, and one of the most important aspects of this achievement is they all have each other’s backs.

The positive energy throughout this season has led to a strong and close relationship between them. Olave said the receivers want everyone to succeed, which has created an encouraging atmosphere on the field.

The close-knit bond between the receivers has led to everyone working together to improve and progress as the season goes on. Specifically, players like Wilson and Olave, who have caught a combined 104 receptions for 1,521 yards and 20 touchdowns so far, are considered the veterans in the wide receiver room.

They have helped some of the younger receivers get better and learn from them, such as fellow starter Smith-Njigba.

“Chris and Garrett are very good teachers. I’m the type of person who just watches and tries to do what they do,” Smith-Njigba said. “I take a lot of stuff from their game, so I can’t thank them enough.”

Smith-Njigba said he is someone who hopes to have more of a leadership role as the season continues. So far, he leads the team in catches and receiving yards with 59 and 1,027 alongside five touchdowns.

“Last year, he was a freshman and we had COVID, so he didn’t really see much. Just to see that development from him this spring, this summer and the fall, stepping into that role and taking that starting job, there’s a lot there and the standard is high,” Olave said. “Jaxon is a great player, really talented. I feel like Jaxon has taken that along and set the bar even higher.”

The three starting receivers have even noticed the young freshmen who have made advances throughout this season, specifically Egbuka, who is the kickoff returner for special teams.

“He’s someone that once he gets the ball in his hands, he’s really electric. I feel like you all have seen that on kickoff return,” Wilson said. “I feel like Emeka is someone that’s ready no matter what. He just puts in the work.”

Egbuka’s explosiveness has been noticed by both Wilson and Smith-Njigba, who both said they think it’s what separates him from other players when it comes to kickoff returns. Egbuka has had a total of 417 kick return yards.

“What makes him dangerous is that he sees the hole and he hits it. Some guys are timid and don’t know where to go, but he trusts the blocks that happen. The way things are set up he just hits it really hard,” Smith-Njigba said. “He makes his mind up quick and he’s a good runner with the ball in his hands.”

The freshmen receivers alongside Egbuka, such as Harrison Jr. and Jayden Ballard, have also made significant strides this season that haven’t gone unnoticed.

“They’re progressing every day by just watching Chris, Garrett and the other starters. Since they came in, they have been making plays and they are just going to be really good,” Smith-Njigba said. “Throughout this season, they are going to keep developing and getting better and better.”

Olave said he’s been very pleased with what the young wide receivers have done since the spring and can’t wait to see what else they can do.

“There’s a lot of guys that can contribute and have contributed,” Olave said. “Once they get that opportunity, they’re ready to ball. I know most of them are locked in. They know the scheme, they know the Buckeye culture. I’m proud of them. They’re doing good this year.”