Woody versus Bo: ‘Because I couldn’t go for three’ 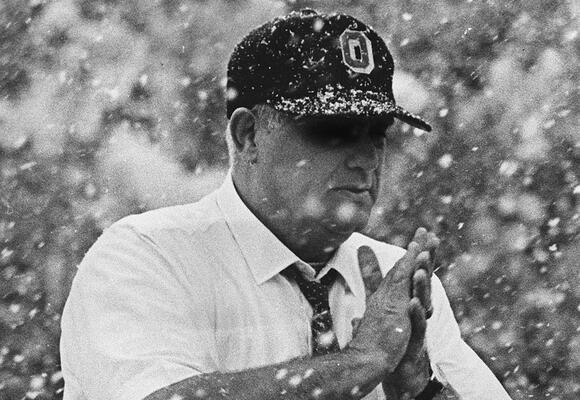 As legend would have it, when asked by the media about going for two points while blowing out archrival Michigan in 1968, Ohio State head coach Woody Hayes infamously said, “Because I couldn’t go for three.”

The context of this saying, and whether it was even said at all, is a mystery. Truth or not, Hayes’ legendary quote forever sits in Buckeye lore and hangs in the balance of the Michigan-Ohio State rivalry’s history.

This storied meeting of archrivals would not have the same pageantry, tradition or unrest as it does today without the “Ten Years War,” a decade where each of the late November clashes were some of the best the college gridiron has ever seen.

Ten games of tension and anticipation with trips to the Rose Bowl were typically on the line when the Buckeyes met the Wolverines over the decade. But it was the two coaches with a past connection — Hayes and Michigan’s Bo Schembechler — that gave the adversarial matchup an iconic status.

After a successful career as a tackle at Denison University, followed by stints as a high school football coach before enlisting in the U.S. Navy, Hayes was chosen to return to Denison as its head football coach.

During his time at his alma mater, Hayes led the Big Red to two division titles and 19-straight wins before taking over the football program at Miami (OH) in 1949. While his stay was short, it was there he coached a tackle by the name of Schembechler, who followed Hayes to Columbus as a graduate assistant for the Buckeyes after the 1951 season.

Schembechler was elevated to offensive line coach for Hayes’ staff, a coaching core that won three National Championships before his departure for Miami in 1963.

The pupil meets the teacher

Leading up to the 1969 meeting between the two programs, Ohio State had beaten Michigan in 12 of the 18 games played under Hayes. The Buckeyes had no signs of stopping that season. Already dubbed by media as “the greatest college football team of all time,” the Buckeyes were overwhelming favorites to win the national championship and expected to stomp 17-point underdog Michigan.

Michigan was ranked No. 12 in the country and led by a coach who was familiar with its rival: Schembechler. In front of a record 103,588 fans at Michigan Stadium, Schembechler’s Wolverines outlasted Hayes’ Buckeyes 21-12 to pull off a stunning upset, rejuvenating the rivalry.

After Michigan’s upset in 1969, Hayes wanted nothing more than vengeance on his former player and coach. He began game planning for the next meeting against the Wolverines on the bus ride back from Ann Arbor, Michigan, after the crushing defeat.

Hayes’ years worth of preparation worked, with fifth-ranked Ohio State beginning the recurring theme of revenge, topping fourth-ranked Michigan 20-9 in 1970.

With the Hayes-Schembechler installment of the rivalry tied at one game apiece, 1971’s game shot tensions to new heights.

With Ohio State trailing 10-7 in the fourth quarter and facing a long third-and-16, quarterback Don Lamka threw the ball towards receiver Dick Wakefield, but Thom Darden made a leaping interception to seal the victory for Michigan.

With the Ohio State sideline screaming for pass interference on Darden, Hayes took it one step further with an infamous tirade, throwing penalty flags into the stands and first-down markers like they were javelins, while also destroying yard markers left and right.

As Michigan took the final knee to end the game, Buckeye linebacker Randy Gradishar slugged Michigan quarterback Tom Slade, starting a 10-minute brawl to halt the game. It was at this point where the rivalry turned into a brutal, but epic, blood-bathing border war.

For All The Roses

1973 saw two undefeated teams — Michigan at 10 wins and Ohio State at nine — playing on the final day for a Rose Bowl berth. With a tough decision at stake, the last situation the voting committee would have wanted occurred as the Buckeyes and Wolverines tied in Ann Arbor, 10-10, with a groundbreaking decision at stake.

Over the telephone, Big Ten athletic directors gathered to decide who would advance to Pasadena, California, with the verdict resulting in Ohio State advancing over Michigan.

It was Schembechler’s turn to enter fits of outrage over the 6-4 decision, bashing the committee and their “petty jealousies.” Ohio State proved its worth with a trouncing of USC 42-21 for Hayes’ fourth Rose Bowl victory.

Following 1973’s ”Vote for the Roses,” the rivalry — and the battle within it — became all about momentum. Riding the advantage of the previous year’s controversial decision, Hayes’ Buckeyes took the next two matchups, outscoring Michigan 33-24.

The Woody and Bo series began to shift in favor of the scarlet and gray, but the maize and blue would prevail in the final three installments, kicked off by a 22-0 rout of the Buckeyes in Ohio Stadium.

Hayes’ incident in the 1978 Gator Bowl would be the sole reason the “Ten Years War” would end between him and Schembechler. With a tie of the conference title on the line, Michigan — which had won the last two games — clinched a share of the Big Ten with a 14-3 win for Schembechler’s fifth victory over Hayes, prematurely ending a legendary decade-long feud.

Without Hayes or Schembechler, The Game might just be another Saturday in November. Instead, it is 364 days of endless preparation and hatred, but also respect.

The names “Woody” and “Bo” are synonymous with college football, but mean even more in the Michigan-Ohio State rivalry.