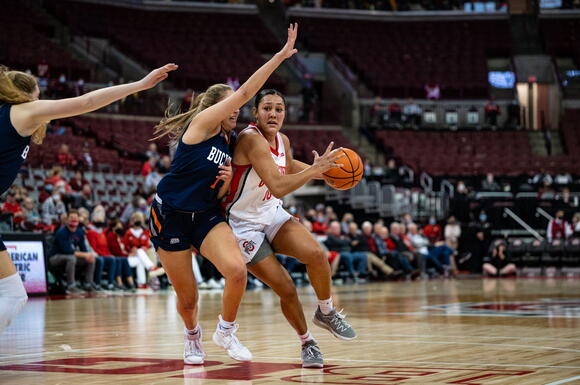 After out-scoring its first two opponents 157-96, the Ohio State women’s basketball team will face a tough test Wednesday when it hosts Bowling Green.

The No. 21 Buckeyes (2-0, 0-0 in Big Ten), who dropped four spots in this week’s AP Poll following wins over Bucknell and Norfolk State, welcome a Falcons team that is returning 10 players from last season’s roster and won its regular-season conference championship and finished with a 21-8 record.

Head coach Kevin McGuff said his team will have its hands full Wednesday night, as Bowling Green (1-1, 0-0 in Mid-American Conference) is balanced on both sides of the ball and features multiple proven scorers.

“I think they are going to be one of the best teams in the MAC, which will put them in consideration for the NCAA Tournament,” McGuff said. “They are really well-coached, they play hard, they are really sound defensively and they can really get hot from the perimeter. So our defense has to be good.”

Although Bowling Green lost sophomore guard Lexi Fleming, the team’s leading scorer from last season at 15.9 points per game, for the season due to an injury, the Falcons are still receiving offensive production, with four players averaging double digits in points.

Leading head coach Robyn Fralick’s offense are freshman forward Zoe Miller and senior forward Kadie Hempfling, who are averaging 14 and 12.5 points per game, respectively. The two forwards have also produced on defense, racking up 23 rebounds in two games, along with three steals and three blocks.

McGuff said the versatile play of Miller could pose problems for his team and they will need to show some resistance in the paint in order to contain the Berlin, Ohio, native.

“[Miller] is physical, she’s strong, and she really knows how to use her body and she creates angles to score,” McGuff said. “There will be a lot of pressure on our post defense.”

Facing off against a formidable frontcourt, the Buckeyes will lean on the scoring and defense of junior forward Rebeka Mikulasikova, who matched her career-high in Sunday’s game against Norfolk State with 19 points and grabbed a team-high six rebounds.

Averaging 11.5 points and four rebounds per game this season, McGuff said he has been impressed with the Nitra, Slovakia, native’s consistent production for the team as it is a product of the work she has put in during the offseason to improve her conditioning.

“She really embraced it and worked hard with it,” McGuff said. “It just really allows her to play more minutes, if she can stay out of foul trouble, and play harder and do the things that we are asking of her. She can just do it for longer stretches.”

The Buckeyes’ backcourt will be met by a pair of Bowling Green underclassmen who can both produce on the offensive end and disrupt the rhythm of the game by forcing turnovers.

The Falcons are spearheaded by freshman guard Amy Velasco, who led the team with 15 points in her second collegiate game, and sophomore guard Nyla Hampton, who has recorded nine steals in two games this season along with 22 points.

Junior guard Jacy Sheldon, who recorded a team-high 20 points in the Buckeyes’ first game against Bucknell, said Hampton presents a unique challenge with her ability to take the ball away on the defensive end that she is both preparing for and embracing.

“She’s a great defender,” Sheldon said. “I think a lot of us look forward to those matchups because it is a challenge. We’re obviously going to respect her and how well she can play defense, but we’re going to be ready for it. [We need to] try and keep ourselves calm and smart with the ball and make smart decisions and passes.”

Wednesday’s in-state contest will tip-off at 7 p.m. in Value City Arena and will be broadcasted live on BTN+.