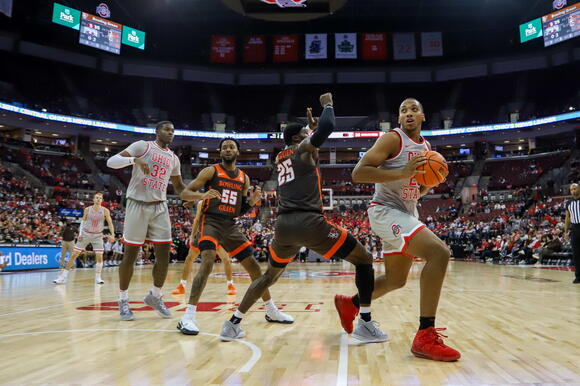 In the first two games of the season, Ohio State’s offense revolved around the services of junior forward E.J. Liddell.

Although the Belleville, Illinois, native led the Buckeyes in scoring with 13 points against Bowling Green alongside freshman guard Meechie Johnson Jr., he didn’t have the same scoring burden that he did in the first two games. Against Akron and Niagara, Ohio State needed all 25 and 29 of his points, but against the Falcons, Liddell was supported by four other double-digit scorers.

Alongside the scoring balance, head coach Chris Holtmann pointed to the team’s ball movement and protection as key reasons for their offensive success Monday.

As Liddell scored his 13 points mainly inside the arc, Johnson dropped his scoring output largely from three-point range. The Cleveland native shot 3-for-8 from beyond the arc, and was one of four Buckeyes to hit multiple threes.

With attention to Johnson and fellow freshman guard Malaki Branham — who scored eight points against the Falcons — Holtmann said he’s just looking for growth from his young backcourt players at this point in the season.

As a team, the Buckeyes connected on 12-of-32 three-point attempts.

“I feel like tonight, we took a step forward in our chemistry as a whole,” Ahrens said. “I give my credits to my teammates for finding me in my open spots.”

Key had his third consecutive double-digit scoring performance, dropping 12 points on 6-of-9 shooting. Brown had a career night in terms of his scoring, also adding 12 points while shooting at a 56 percent clip.

“He’s in the best shape in his time here. His body composition is the best it’s been,” Holtmann said. “He’s got to be able to continue to take steps forward when he’s playing against bigger, longer guys.”

The efforts of that trio allowed the Buckeyes to stake out a 46-26 advantage in the paint.

As Ohio State saw scoring from multiple Buckeyes, it also benefited from its best passing game of the season thus far — totaling a season-high 27 assists with just 12 turnovers.

“I feel like we had a lot of ball energy today. The ball was moving a lot,” Brown said. “We had a pretty good amount of assists, so I think we were just moving the ball. Basically just looking out for each other on the court.”

As Monday proved to be Ohio State’s most complete performance on the offensive side of the ball, Ahrens said it gives the Buckeyes some drive heading into their road battle with Xavier Thursday.

“It felt really good to get things clicking, get a good momentum rolling for this next week and a half,” Ahrens said. “We’re looking forward to it, we’re excited.”