Football: Tuimoloau and Sawyer making impact in first year with the program 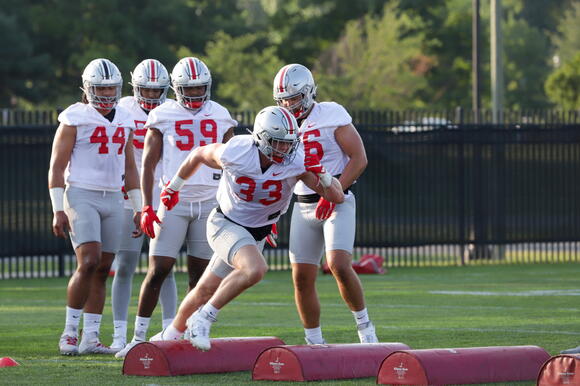 Coming out of high school, five-star freshmen defensive ends J.T. Tuimoloau and Jack Sawyer have had a lot to live up to. Thus far in their college careers, they have made noticeable impacts on the field.

Both Sawyer’s and Tuimoloau’s high school stats are eye-popping: Each recorded nearly 100 tackles and 20 sacks. That has almost directly translated to college, as each has recorded over eight tackles and three sacks through nine games.

Although it may seem that the two have adjusted fine at this point, both expressed how tough the transition has been. Sawyer said that it has not been as tough despite forgoing his senior season at Pickerington North High School, leaving him over a year removed from his last game action.

Sawyer elaborated on the fact that in high school, it’s easy to bull rush a quarterback, but the level of play is so much greater in college that you can’t try to overpower a guy on every play.

“These guys are strong as hell,” Sawyer said. “That’s definitely the big difference.”

Sawyer still expressed that the Buckeyes’ defensive linemen are a really tight-knit group and said the veterans on the team have made freshmen like Sawyer feel more at home.

“It definitely took a bit of time for me to realize who I’m playing against every day, but the reality was not instant,” Sawyer said.

The Pickerington, Ohio, native said he believes the younger Buckeyes are increasing their confidence as time progresses and that coaches really hone in on their techniques. Sawyer also mentioned that he’s sculpted his body with the help of coaches and nutritionists, gaining roughly 30 pounds since arriving in January.

Sawyer said he isn’t bothered that other defensive ends or even other freshmen are getting more playing time than him. In fact, he said he’s motivated by the younger players to get to that level of play.

Tuimoloau presents the perfect example. Given Tuimoloau not only excels on the gridiron, but the basketball court, Sawyer said he has a great body type to be a defensive end. 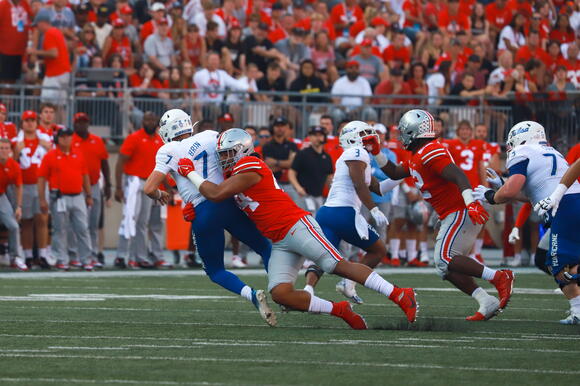 Tuimoloau was a highly scouted football player in high school, but his offers to play basketball at the collegiate level, such as at Oregon and Washington, flew under the radar of many.

“Sometimes I did feel like I was misunderstood for choosing the wrong sport or the wrong school, but I trusted the process and trusted God, and I’m blessed to be here,” Tuimoloau said. “Basketball is still in the question. We’re just on football right now.”

Tuimoloau has racked up 12 tackles and 3.5 sacks on the season, and has become an integral part of the defensive line, which has truly found its identity halfway through the season.

Tuimoloau said coaches have told him to keep his head up, learn from mistakes and not dwell on any play. He said practicing against the offense prepares him well for games.

Junior defensive end Zach Harrison said he tries to show the younger guys the right way to go through drills and pushes them to play hard, so when he sees the younger guys making big plays, he gets excited.

“Jack and J.T. are both just getting more comfortable playing in games,” Harrison said. “I think every freshman has that moment like, ‘Oh crap, there’s so many people here watching me,’ and then they realize it’s just football.”

The defensive tackles and ends have an ongoing competition about who can record more sacks on the season, and freshmen Sawyer and Tuimoloau have been neck and neck thus far.

“We compete in practice and that adds to the brotherhood,” Tuimoloau said. “The little bickering is our way of lifting each other up and motivating each other.”