Football: No. 4 Ohio State prepares to battle upset-minded No. 19 Purdue 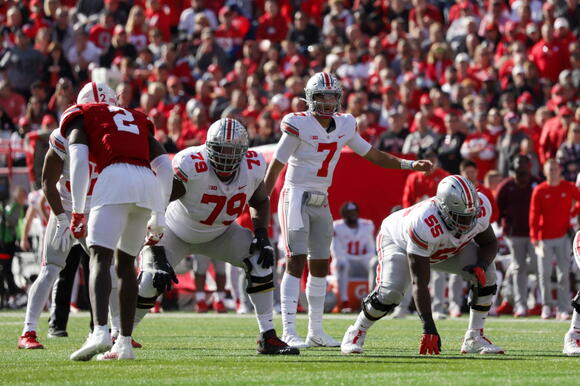 No. 4 Ohio State enters Saturday’s competition as a team in playoff position, but that might be just where No. 19 Purdue wants it.

The Boilermakers (6-3, 4-2 Big Ten) have fashioned themselves as giant slayers this season, taking down two top five opponents thus far, and look to add to their graveyard of top-tier opponents. Head coach Ryan Day has already fallen victim to the Boilermakers in years past, serving as offensive coordinator when the then-No. 2 Buckeyes fell 49-20 in West Lafayette, Indiana, in 2018.

As that 2018 blowout lives in the minds of Ohio State’s veterans, senior cornerback Sevyn Banks — who was a freshman during that loss — said it’s time that the Buckeyes (8-1, 6-0 Big Ten) right the mistakes of that night.

“That 2018 game, I didn’t play, but I was there,” Banks said. “Definitely got to get it right. Obviously, everybody knows that that was a big loss, or an unexpected loss.”

The 2018 loss knocked the Buckeyes out of playoff position and was used as rationale by the College Football Playoff committee to hold Ohio State out of national championship contention. A loss in this year’s game will almost certainly keep the Buckeyes out of the playoffs again, for the first time since that 2018 season.

Looking at this season, Purdue has already spoiled No. 20 Iowa and No. 7 Michigan State’s paths to the playoffs with upset wins. Both wins came in dominant fashion as well, albeit in different ways.

The Boilermakers’ defense powered Purdue to its 24-7 win over the Hawkeyes, while their potent pass offense torched Michigan State’s secondary en route to a 40-29 win over the Spartans.

“Really, really dangerous on offense, really good players. Our guys understand that,” Day said. “They’re tied for first in the West, they’re 4-2 with the rest, four-way tie. They’re playing for a chance to go to Indy. They certainly have our attention.”

The Boilermakers have a pair of dynamic game-changers — with one on each side of the ball — that have carried them throughout this season.

On defense, senior defensive end George Karlaftis, who has been touted as a potential top 10 pick in the 2022 NFL Draft, has given opposing run and pass offenses fits all year long. The West Lafayette native has become a staple in any opponent’s backfield, racking up 7.5 tackles for loss and three sacks this season.

Karlaftis has also forced three fumbles, good for second in the Big Ten.

With help from Karlaftis’ pressure, the Boilermakers pass defense has emerged as one of the best in the conference, allowing just 185.3 passing yards per game and a conference-best 54 percent completion percentage.

“I think it starts with their defense,” Day said. “Karlaftis is one of the best defensive ends in the country. He’s really strong, but they have a bunch of good players.”

Offensively, Purdue relies on the services of junior wideout David Bell — who is the only receiver in the Big Ten who has eclipsed 1,000 yards this season. Alongside his 1,003 yards, Bell has hauled in 64 catches with five touchdowns.

In Purdue’s top five matchups, Bell has stepped up his play.

Against Iowa, Bell snagged 11 receptions for 240 yards and a touchdown. Bell turned in similar numbers against the Spartans, hauling 11 catches for 217 yards and a score.

With Bell’s impact, Purdue’s passing offense ranks second — behind only Ohio State — by putting up 2,993 yards and completing 70.5 percent of their attempts.

“I think they have a very good passing offense. The quarterback is excellent. Coach Brohm does a really good job. Bell is a really talented receiver, but they have other guys, too, that are very, very good. He attacks you in different ways,” Day said. “Our guys have been playing at a high level, but this is a new challenge. We really haven’t gone against this type of offense like this.”

It’s hard to call Purdue a trap game, since they rank in the Top 20, but with meetings with No. 7 Michigan State and No. 6 Michigan on the horizon, this game has gotten that distinction.

With the Boilermakers coming to town looking to spoil Ohio State’s playoff chances, graduate cornerback Marcus Williamson said the Buckeyes need to stay in the moment and keep their focus on winning.

“It’s just showing up day to day, same routine, keeping it going and just setting that example,” Williamson said. “It’s very hard to win games, especially at this level. To do it every week takes a lot of hard work, a lot of dedication.”