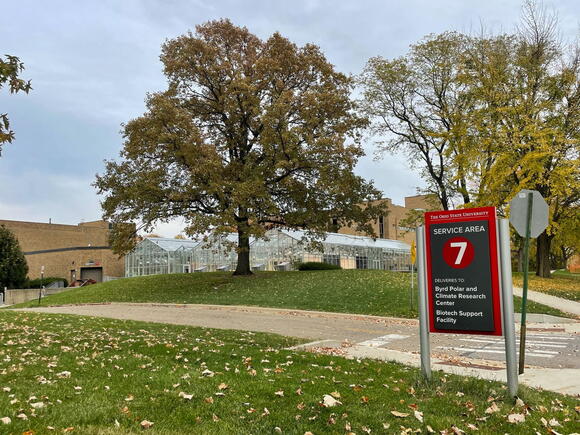 The freezers that have been active within the Byrd Polar Climate Center for over 30 years are beginning to show their age and are falling into disrepair. Credit: Mary Kidwell | Campus Editor

Over a thousand years worth of climate data contained within ice cores at the Byrd Polar and Climate Research Center could soon be lost.

The freezers that have been active within the Byrd Polar Climate Center for over 30 years are nearing the end of their usable life, Ellen Mosley-Thompson, a professor in the Department of Geography, and Lonnie Thompson, a senior research scientist at the center, said. This would lead valuable research samples — some of which cannot be replaced — to be lost.

“We need to double the size of the freezers, and we need to renovate those old freezers because of all the years of freezing, of thawing, we’ve had issues with ice growing underneath the floor, where water freezes in the ground and then expands and cracks the floors and shelving,” Mosley-Thompson said.

Mosley-Thompson said the first freezer was built in 1989 and the second in 1992. Both freezers have been active since they were built, storing the cores at the proper temperature of -30 degrees Fahrenheit.

Thompson and Mosley-Thompson said the ice cores stored at the center are used to provide insight on how the climate has changed over thousands of years.

“They record climate, things like temperature and precipitation, but they also record the forcing’s of climate, [which are] the things that caused the climate to change, such as volcanic eruptions and the changes of the output of the sun,” Mosley-Thompson said.

Mosley-Thompson said a single ice core measures to about 1 meter in length, and if placed end-to-end, every core in the facility would measure out to a length of about 4.5 miles. Along with the quantity, the ice cores vary greatly in when and where they were excavated.

“It is geographically probably the most diverse collection of ice cores on Earth because we started the drilling outside of polar regions,” Mosley-Thompson said. “We have been collecting cores from all over the world for the past 40 years.”

Mosley-Thompson said the building itself is safe, but freezing and thawing water inside the freezers has caused damage, allowing excess air in and causing snow accumulation in the freezer.

While an official price figure has not been confirmed, Mosley-Thompson said a previous estimate from 2016 indicated that the cost of doubling the size of the freezer could be anywhere between $6 and $9 million.

Mosley-Thompson said in an effort to preserve the ice cores, the research center is raising money for new freezers.

“We’ve been very fortunate,” Mosley-Thomspon said. “Over the last year, we’ve raised about $475,000 toward [the freezers] just from donors and people all over the country who are interested in seeing that those cores can be preserved for the next generation.”