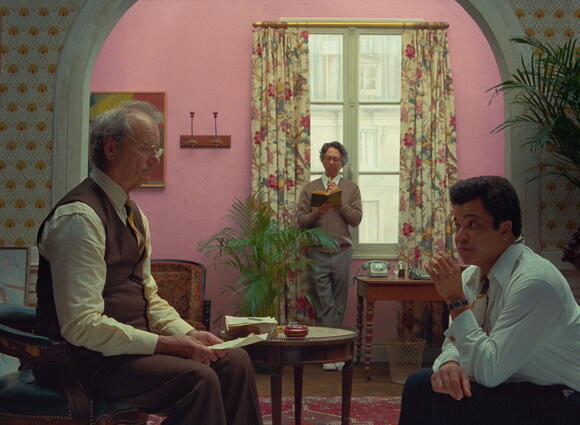 From left, Bill Murray, Wally Wolodarsky and Jeffrey Wright in the film “The French Dispatch.” Credit: Courtesy of Searchlight Pictures/TNS

Pastel color palettes, symmetrical shots and witty dialogue make the work of director Wes Anderson recognizable from a mile away.

His newest film, “The French Dispatch,” has an abundance of these characteristics, making it the most quintessential Anderson film yet — both an incredible feat and fault. Originally scheduled to premiere July 24, 2020, “The French Dispatch” was one of many highly anticipated films that fell victim to a delayed theatrical release due to the pandemic. However, the movie and its robust cast finally found their place on the big screen Oct. 22.

Set in a fictional French city, “The French Dispatch” follows the publication of a print magazine — based on The New Yorker — led by its stern editor Arthur Howitzer Jr. (Bill Murray). The film itself is structured like a magazine, following the narratives of three distinct stories published in the latest edition of the magazine.

Although all of Anderson’s films include energetic camera movements, dysfunctional characters, abrupt violence and deadpan humor, these idiosyncrasies are amplified in “The French Dispatch.”

The meticulous stylization of “The French Dispatch” asserts Anderson’s position as an auteur — a filmmaker whose influence over a film is so great and individualized that they are considered the author of the piece. Additionally, the cinematography and carefully crafted sets make the film arguably his most visually stunning piece.

However, the film as a whole felt like a display cake –– cardboard covered in artfully decorated frosting.

Although the three-part, anthology-like structure nicely represents flipping through a magazine, the limited time allotted to each segment makes the plot feel surface-level, lacking any significant substance. The absence of character arcs due to this increases the difficulty of emotional investment in any particular character.

A cast of approximately 20 relatively big-name actors, such as Owen Wilson, Saoirse Ronan and Timoth é e Chalamet, would make any cinephile giddy, but some of the roles felt unnecessary. For instance, the characters played by Christoph Waltz and Elizabeth Moss hardly spoke or appeared on screen.

The film can become overwhelming at times due to the intense visual stimulation and the fast-paced dialogue; however, it makes the film rewatchable. With the vast number of details packed into every shot, something new can be picked out during each subsequent viewing.

“The French Dispatch” is a visual treat from start to finish. Although the stories inside can be appreciated and enjoyed, there is a lack of plot and character-driven substance that makes the film good, rather than great.